Share All sharing options for: Arizona vs. Stanford: Attendance sparse for Cardinal homecoming

Stanford has never been known for its football crowds, and today is a prime example of why. On homecoming weekend, the Cardinal have about as many empty seats as people in the stands, and many of those in attendance are Arizona fans. Not much support for the No. 18 team in the nation.

Brandon Huffman of Fox Sports tweeted out this photo of the crowd prior to kickoff: 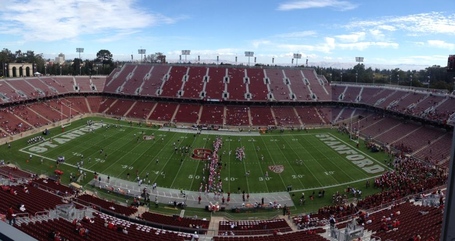 The crowd has since grown, but plenty of empty seats remain. Cheers for Arizona seem louder than that of Cardinal fans. This is for a homecoming game, traditionally some of the most well-attended weekends in college football.

Stanford is no stranger to this, as it chose to significantly reduce the number of seats in Stanford Stadium when it was remodeled. Even with that reduction, it still appears to be too many.

The Cardinal and Wildcats are tied 7-7 midway through the second quarter in an important Pac-12 battle for both teams.