It's going to be a long, hard offseason for Stanford Cardinal kicker Jordan Williamson.

No one would blame Williamson if he just looked like this from now until August. 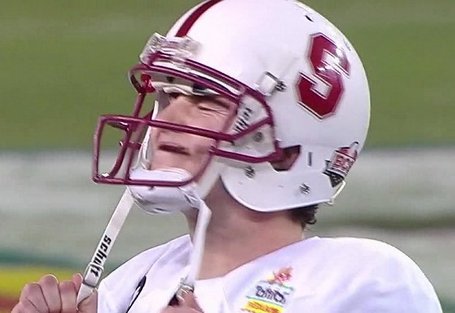 In a losing effort, Andrew Luck played an amazing game for the Cardinal. He finished 27-of-31 for 348 yards, two touchdowns and an interception. He was basically flawless in the fourth quarter and did everything he possibly could.

As did Stepfan Taylor, who rushed for 176 yards and two touchdowns on 35 carries in the losing effort.

Meanwhile, Brandon Weeden kept pace with Luck all evening. He completed 29 passes on 42 attempts for 399 yards and three scores. It was the first time both quarterbacks passed for more than 300 yards in the Fiesta Bowl.

Justin Blackmon was sensational for the Pokes, making big catch after big catch. He finished with 191 yards and three touchdowns on eight receptions.

The Cowboys finish the season 12-1 and will likely end up No. 2 in the final polls, whatever consolation that might provide them. Stanford finishes the year 11-2 and should remain in the final top ten rankings.

To discuss the game with Fiesta Bowl fans, visit with Stanford fans at Rule of Tree. Oklahoma State's home on the SB Nation network can be found at Cowboys Ride for Free.