The Stanford Cardinal were dealt a serious blow to their national championship hopes today as Andrew Luck revealed that he shaved his beard at Bay Area Media Day. When Luck revealed his clean-cut look, he was immediately greeted with the gasps and sobs of passing Stanford fans and sighs of relief from Cal fans.

Photo proof after the jump. 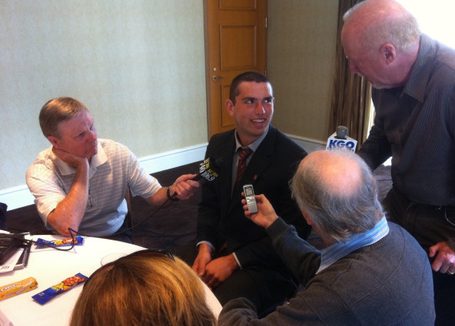 Flags flew at half-mast at the Pac-12 office this afternoon upon the news. "It'll be very difficult for the Pac-12 to move forward with this stunning development." Commissioner Larry Scott remarked in a statement released to the press. "We felt Heisman Trophies, Nobel Peace Prizes, time travel via teleportation...all of that was possible for Pac-12 football. But now that there's no long a beard to fear, we'll have to settle for this absurd TV contract for the conference I negotiated. These are dark days."

When asked for comment about the solemn news, Luck shrugged his shoulders and replied, "You know I can grow this thing back, right?"

For more on Stanford football, go to Rule of Tree.