So there's some story about Andrew Luck participating in a sleep experiment to earn course credit at Stanford University. Not a big deal, we all know most distressed Cardinal students check in with their professor the week before finals and drop the classes they're struggling in to avoid any potential GPA deflation. Luck sleeping in for a class so girls can experiment on him seems like an upgrade in academic conduct for Stanford students.

What is intriguing is that the article now mentions a girlfriend for the Cardinal quarterback--a one Nicole Pechanec, Cardinal women's gymnast. 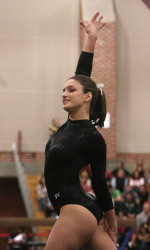 Ah, a gymnast. Fine choice. Flexible and athletic. Descended from Czech parents, so you know she's probably very studious. And it shows with her major, as she's studying engineering, which means she's probably nerdier and smarter than Luck. You got a winner there Andrew.

Must be a special one Andrew. Hope she's priceless, because 40 to 50 million is about as high as it can get.