Saturday's game between No. 22 Notre Dame and No. 6 Stanford will feature the Stanford Cardinal sporting a brand-new look. As part of Nike's extensive "Pro Combat" campaign of alternate college football uniforms, Stanford will take to the field with an interesting color scheme. These new unis have already been spotted in the wild, as the Cardinal took to the field for warm-ups before the game. 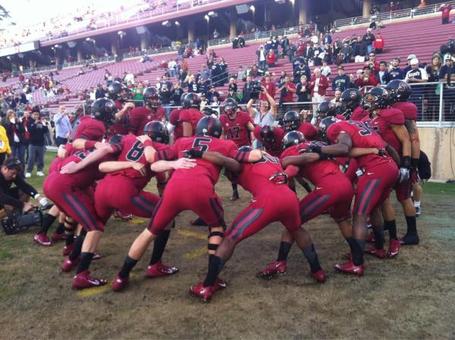 SB Nation Bay Area has previously taken a look at the preview images of these uniforms, but the reality is somewhat different when the unis aren't viewed against a pitch-black background. Ray Ratto of CSN couldn't resist cracking a little joke upon seeing these new outfits:

Armed with their new unforms, the Stanford Fighting Blood Clots From Hell take the field for warmups

Certainly, the color scheme could be a bit better. This is pretty par for the course with the Pro Combat line, however. At least the Cardinal were lucky enough to get a shade of red. Stanford fans may have been hoping for a better-looking game to wrap up the season, but the Cardinal will be hoping that one last win will look just as pretty, regardless of what the team will be wearing.

Feel free to discuss all sartorial matters related to the Cardinal with your fellow Stanford fans at Rule of Tree.