The Stanford Cardinal received the opening kickoff from the Virginia Tech Hokies to start the 2011 Orange Bowl. Andrew Luck rolled out on the opening play and picked up a first down with an 11 yard scramble, then found Stepfan Taylor on a little running back flat pattern. After Taylor was stuffed on the next play, Virginia Tech defensive coordinator Bud Foster dialed up the blitz, and Luck was forced to roll out and throw it short of his intended receiver. It forced an early Cardinal punt to Virginia Tech.

Tyrod Taylor began with a bubble screen to the outside to Danny Coale, but Chase Thomas and Owen Marecic gang-tackled Darren Evans on second down and forced a 3rd and 6. Then Stanford defensive coordinator Vic Fangio duplicated his Virginia Tech counterpart and sent the pressure, forcing Taylor to scramble and circle around, eventually finding Coale, but short of the first down. Brian Saunders punt was then returned for 25 yards by Drew Terrell, so the Cardinal are now set up at midfield.

Also, Jim Harbaugh seems to know something we don't. 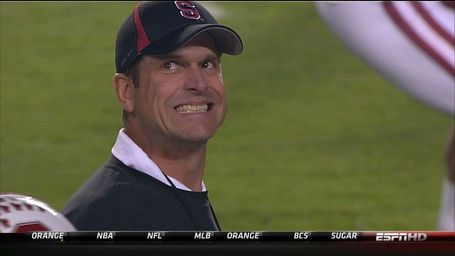 Follow the action with fellow Stanford fans at Rule of Tree, or with fellow Virginia Tech fans at Gobbler Country.