The San Francisco Giants have four starters on the NL team, and one of them was at a bit of a controversy in the baseball realm. A bit of ballot stuffing by the Bay Area faithful landed Pablo Sandoval in the All Star Game over David Wright, who by all baseball metrics is having a much better season.

Sandoval proved why he belongs in Kauffman Stadium, hitting a triple off the right field wall that nearly went over the fence, driving in three runs. It was the first triple for Kung Fu Panda in 2012 and went towards establishing home field advantage for the World Series. Sandoval would later score the final run of the inning off a Dan Uggla infield single.

Justin Verlander had a very un-Verlander like pitching experience as all three Giants got on base. Melky Cabrera hit a single to left center and was driven home by a Ryan Braun double, while Buster Posey walked on four straight balls.

Matt Cain entered his half of the inning already up 5-0, something that has probably never happened to him before. Cain, who somehow generated controversy as the starter despite his perfect game this year, gave up an infield single to Derek Jeter that glanced off of Sandoval's glove. He then retired Robinson Cano, Josh Hamilton, and Jose Bautista without too much trouble.

Meanwhile, both Sandoval and Cabrera were spotted from space wearing funky shoes. 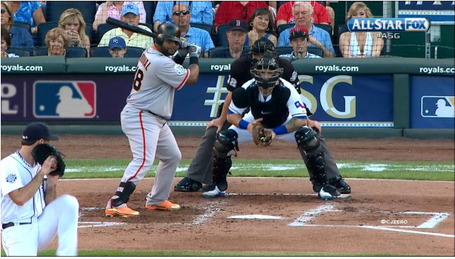 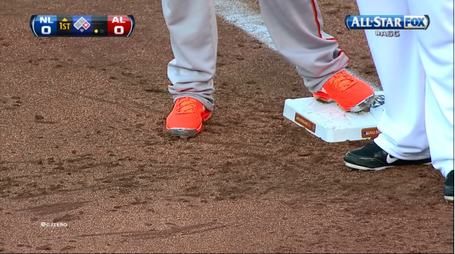 For more on the Giants, head over to McCovey Chronicles. For more on the A's, check out Athletics Nation. For complete coverage of the All-Star Game and all things MLB, check out Baseball Nation. Also, subscribe to the SB Nation Youtube Channel for video commentary.