Brian Wilson is known for a lot of things. World Series championship? Check. All-Star Game appearances? Check. Insanely beautiful beard? Check. And despite being out for the season with an arm injury, Wilson remains arguably the most beloved Giant on the team right now for his antics both on and off the field.

On Sunday afternoon as the Giants wrapped up their interleague series with the Athletics, AT&T Park had a pretty cool giveaway for those in attendance: a Brian Wilson garden gnome, complete with beard and Giants hat.

Yes, we have a photo. Yes, you're going to want one.

Here is a photo of the Wilson gnome, which is pretty damn cool if I do say so myself. 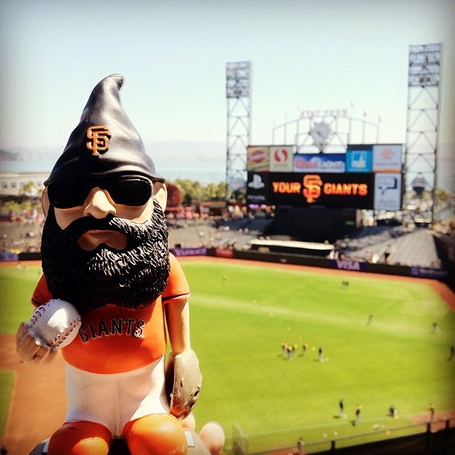 The lines to get a gnome were incredibly long leading up to the game, and it sounds like the staff at AT&T Park didn't have enough for everyone who wanted one. Kind of disappointing since it was obviously going to be a fan-favorite. Hopefully they're made available in the team store or something for those who missed out on getting their hands on a miniature Brian Wilson.

For more on the Giants, be sure to check out McCovey Chronicles.