San Francisco Giants Get Their Own Virgin America Plane [PHOTO]

Share All sharing options for: San Francisco Giants Get Their Own Virgin America Plane [PHOTO]

The Brian Wilson marketing effect has gone overboard since the San Francisco Giants won the World Series. Wilson has gotten his own commercials, his own fanbase, and plenty of other things. It might be kind of annoying to deal with in the long run.

However, it has to be helping the overall brand value of the Giants. It's gotten them their own airplane in the skies!

Take a look at the photo of the Giants plane after the jump, which features plenty of reminders that Wilson remains an integral part of the Giants baseball team. 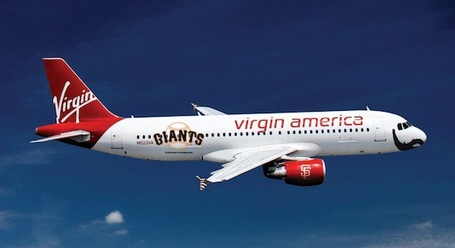 Don't think you've ever seen a more handsome-looking airplane, have you.

In fact, there's plenty of contests ready to go for the Giants. The Virgin America Facebook page released this statement here.

Will you "Fly the Beard" this season? Spot our new bearded SF Giants plane, take a pic and tweet the photo to @VirginAmerica using the #FlyTheBeard hashtag. The best photo each month will win a free flight and one grand prize winner will score Giants tickets and 2013 Virgin America Club Level passes. See official rules here: http://vgn.am/FlyBye

To talk about Wilson and the Giants, go to McCovey Chronicles. To discuss the Giants storystream, hit up the SB Nation Bay Area storystream.