Have You Seen This Giants Fan?

Share All sharing options for: Have You Seen This Giants Fan?

San Francisco Giants skipper Bruce Bochy went on the All Things Considered Show with Robert Siegel on NPR to discuss a number of things, but the most interesting topic that came up was that of a lone Giants fan named Billy. Billy was a staple outside of AT&T Park before and after games for years, but hasn't been seen since the end of July. The players and staff of the Giants are worried about Billy, and want everyone's help to try and find him. Make the jump to learn more about what you can do.

"[Billy] was always by himself," said Bochy. "I didn't know any of his history, really didn't ask him. It was just Billy, our friend, and he was a guy we thought would be there everyday and now we look back and we took it for granted that he'd always be there."

The coldest nights to the hottest days, the earliest mornings to the latest nights, Billy was always there. Players gave him tickets, Bochy gave him a jacket, while security guard Orlando Green gave him a place to live. He'd become part of the family, an institution if you will, and in a sport chock full full superstitions the Giants have free falled in the standings since his disappearance; something both Billy and the team wouldn't want.

So if you see this man contact someone with the Giants organization because they would like to know their friend is alright. 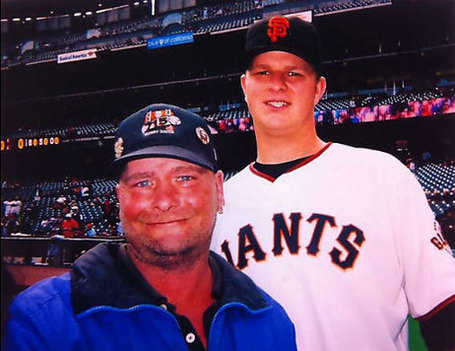 via the San Francisco Giants