Share All sharing options for: Brian Wilson's Marty McFly Nike's Takes Him Back To The Future For a Good Cause

You may or may not have seen Brian Wilson's kicks in the San Francisco Giants dugout last night at Coors Field, but either way here they are again: 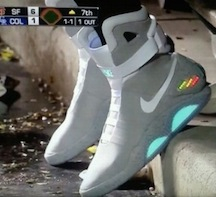 Yeah, I know. Awesome. If you're a fan of the Back to the Future trilogy, you are well aware that these are basically an exact replica of Marty McFly's Nike Air MAG sneakers; yes the one's that use magnets to levitate. Unfortunately these can not levitate yet, nor will they be able to self-lace (until 2015 anyway), but were created for a terrific foundation to help a terrific cause. Make the jump to learn more, and a few awesome videos of these iconic kicks.

Nike has partnered with the Michael J. Fox Foundation for Parkinson's Research to create the Back 4 The Future Project in which 1500 pairs of the Nike MAGs to be auctioned on Ebay, with approximately 150 pairs a day released daily on the website until September 17. If you really, really just have to have a pair, get ready to open your pocketbook up, with the minimum price you'll likely spend on them is $2000. But on the other hand, they are for a good cause, and are rather ridiculously awesome.

Wilson bought himself two pair for charity, and certainly might have aided in their 9-1 victory over the Rockies. I just hope he's wearing them tonight, and hopefully the rest of the year if they keep winning.

Maybe, just maybe, they're the 2011 version of the rally thong.

Here's a little video from Nike, including Kevin Durant and the Doc.

Back For The Future (via NikeB4TF)

And just cause this scene is awesome: