Many a San Francisco Giants fan is licking their chops at the numbers that prospect Gary Brown has been putting up for High A- San Jose this season, and now Gary has some hardware to put up on his mantle because of them. Brown was named the San Jose Giants' offensive player of the year for the 2011 season and for good reason.

Brown leads the team in stolen bases (47), hits (165), triples (12), batting average (.325) and OBP (.394). Gary's 165 hits leads the California League, good enough for third best in all of Minor League Baseball this season (take that Bryce Harper). So hats off to Mr. Brown, hope to be seeing you soon on the shores of McCovey Cove. 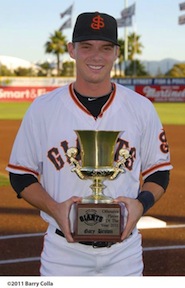