It isn't often that you get the chance to visit the White House and have a meet and greet with the President of the United States. The players, coaches and staff of the San Francisco Giants got that honor on Monday, and looked to have a great time doing so.

Make the jump to check out some photos form their visit, and an official transcript of what the President had to say about the defending champs of Major League Baseball.

I'll begin with this photo of Brian Wilson, looking sharp in his zoot-suit inspired attire shaking the hand of the most powerful man on the planet: 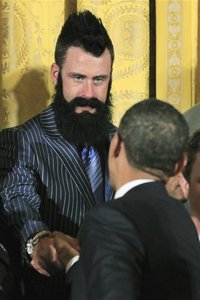 Even when shaking hands with the leader of the free world, B. Weezy always has that crazed look in his eye. Honor. Determination. Beard. Brian Wilson.

Here's a link to the San Jose Mercury News' slide show of photos from the Giants D.C. visit.

Lastly, here's a link to the official White House transcript of President Obama's speech during the team's visit. The President mentions the beard and the freak obviously, but also talks about his time with Willie Mays abord Air Force One, and praises the team's work with organizations like the "It Gets Better" project. As always, Obama cracks a few wise ones, and undoubtedly sneaks a Chicago White Sox reference in there, it's his favorite team.

Great day for Giants fans everywhere to celebrate and reminisce on last year's accomplishments. But now the team can fully close the book on last year and focus on repeating as champs this year.