What I really should be showing is you a great catch by an outfielder. Nyjer Morgan of the Milwaukee Brewers made an incredible play on a deep fly by San Francisco Giants first baseman Nate Schierholtz directed right at the left-center gap.

Instead...really Nyjer, did you have to go and do that? Image after the jump (or you can click here to view it). 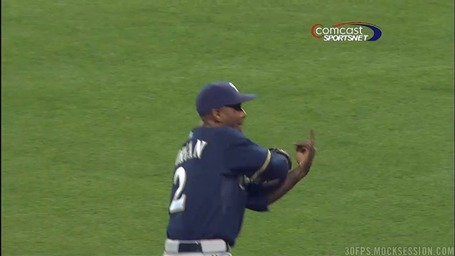 Morgan had just showed off his incredible arm ability, so he decided to show off his use of the finger against the San Francisco Giants fans in the bleachers in left field. I'm not sure if there was some girl in the stands he was directing his Cee-Loish ire toward, or if it was just some dudes plastered with their favorite Pilsners taunting him all night, but it wasn't exactly the most appropriate of responses.

Morgan was not ejected. I suspect he will be earning a sizable fine and potential suspension in the upcoming days. Either that or someone's decking him.