On the Road: A San Francisco Giants Spring Training Tale

I recently drove down to Scottsdale for some San Francisco Giants Spring Training action with my best friend. Here's the story of our adventure.

Share All sharing options for: On the Road: A San Francisco Giants Spring Training Tale

I've been a San Francisco Giants fan since the day I was born, but the one thing I'd never done was head down to Scottsdale to see some Spring Training action under the desert sun. My best friend and I decided it was about time, so we packed up the car and headed out on the road for Arizona this past weekend.

Before we left our excitement levels were off the charts. Getting up close and personal with the players, doing some semi-scouting on players we hadn't seen much of, that sort of thing. Unfortunately we hit a speed bump before we ever left as a tainted breakfast burrito gave me some untimely food poisoning on Friday, the day before we were set to leave. I didn't sleep much at all that night as the evil burrito took its toll over and over again, and come Saturday morning, I wasn't feeling much better. But I wasn't about to let a little stomach problem stop me from getting to Scottsdale, so we took off with me feeling under the weather and my buddy driving most of the way there. I actually had never been to Arizona, so I was interested to see what it was like, and got a good taste of it only minutes after we crossed the border into the Grand Canyon state. The United States Border Patrol had a checkpoint with drug dogs, surveillance cameras, the whole works, making sure to question everyone that passed through it tenaciously, even though we hadn't crossed any international borders. That's when I knew that Arizona was a different kind of place than I'd ever been before.

As the drive went on, the Cacti grew taller and taller in the Arizona wasteland, and we arrived at the hotel just in time to see a gorgeous sunset over the desert mountains. After we checked in and had dinner (well I didn't as my stomach was still not right from the devil burrito) we hit the sack, as we wanted to get to Scottsdale Stadium early the next morning in hopes of rubbing shoulders with some of our favorite Giants. 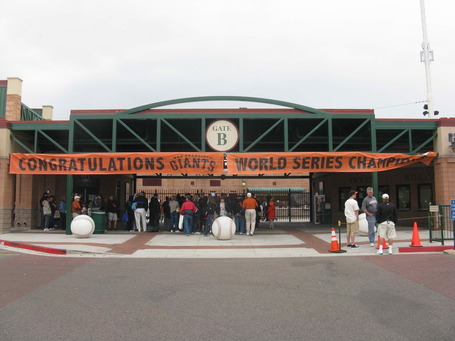 Sunday morning came and I was feeling a lot better. We were out and about around by 9 A.M., but the park didn't open until 11, so we mosied around the city a bit. I'd spent a lot of time in the deserts of Nevada and California, which aren't too dissimilar from Arizona, but the main difference was the people who resided there; a whole different breed of folks than I'd ever met in my life. From two-toothed people talking to themselves, to sun-worshiping elitists driving around in Bentleys, the spectrum of people was incredibly wide; although there didn't seem to be many run-of-the-mill middle class people about. I can't remember ever seeing a Ferrari dealership down the street from a payday loan center, or a man dressed as a sea captain from head to toe in the middle of a desert, walking along with a corncob pipe. The fact that there were so many signs in public places that read ‘please don't touch the cactus,' told me all I needed to know about the folks around these parts; but I digress...

We got to Scottsdale Stadium and watched some BP, players were handing out autographs to little kids, pitchers were running drills and throwing in the bullpen, it was just as I'd imagined it to be. Fans from all around the league were in attendance; baseball purists who love the game so much it didn't matter who was playing. As it happened the Giants were playing the Oakland A's that day, the Bay Area battle under the desert sun, although I didn't see more than 20 A's fans in the sold out stadium. My buddy and I set out for the outfield lawn and picked our spot to watch the action, surrounded by a sea of orange and black just as if we were at AT&T Park.  It was a pretty good game, Aubrey Huff hit a 3 run bomb in the 8th, but Madison Bumgarner's early struggles sealed the Giants fate as they lost 6-4 to their rivals across the Bay.  The most bizarre thing I saw that day was a young lady with a cheek full of chewing tobacco a la Rod Beck, not exactly my definition of attractive. We went to a nice Mexican restaurant a couple blocks from the stadium for dinner (no, I didn't have a burrito) that was empty besides us, another strange Arizona experience seeing it was Sunday night and the game had just finished. Coincidently, Red Lobster was packed to the rafters; they must have some good seafood in Scottsdale. We grabbed some beers at a supermarket and headed back to the hotel, swam in the pool with a bunch of little Rockies fans, then went to bed to do it all over again on Monday. 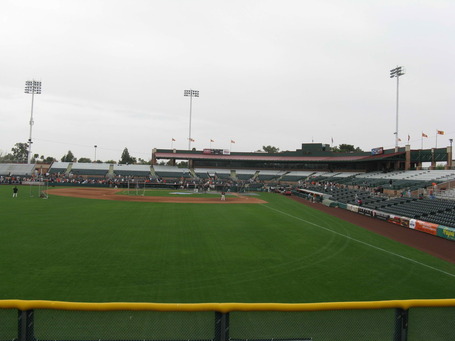 When we got up the next morning, an ominous rainstorm was lurking on the horizon, threatening the game against the Colorado Rockies. It was dark and really windy, and by the time we got in line for the game the rain had started to lightly fall. While in line Bill Neukom happened to walk by and I got the opportunity to shake his hand; he seems even nicer in person than he does in the media in my opinion. My friend and I had good seats for this game, 3rd row on the right field baseline, but didn't get to see much BP or pitching practice as the players spent most of the morning out of the elements, possibly hoping for a rainout while those in the stands prayed for some sunshine. The Giants really only got about 10 minutes of warm up time on the field before the game began, and that day's starter, Tim Lincecum, probably didn't get through his usual warm up either. As the wind blew and the rain drizzled, no one on either team really looked comfortable in the field or the batters box, as it was an ugly start to an ugly day in Arizona. Timmy never looked good and got yanked after two innings in the rain, while some errand throws from the outfield and a few booted ground balls led to some easy Rockies runs, Dexter Fowler hit a triple that became and inside the park homer after Miguel Tejada missed a cutoff, he even got hit in the helmet by an Aubrey Huff throw to second base, it wasn't the Giants' day to say the least. Mother Nature was the eventual winner as the game was called after the fourth inning, a good thing for the Giants, as they looked absolutely awful. Luckily for us we got a refund for our tickets, and left Scottsdale Stadium soaking wet and a bit disappointed. 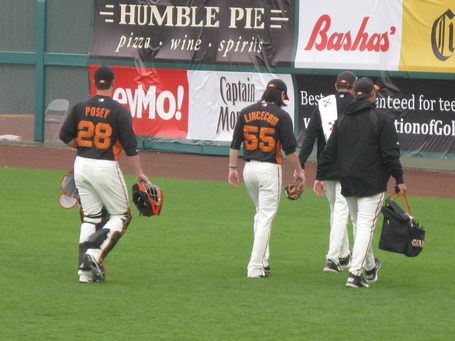 We figured a good place to dry off and get our mojo back before our drive home was at Denny's, where we were once again astounded by the people that lived in the area. As we were in the middle of eating an elderly lady turned around in her booth to tell us a joke, "how does a pig sign its name? With a pig pen!" The non-sequitur comment caught us both off guard, but she was so enamored with the quality of her comedic material that we couldn't do anything but laugh along with her. The waitress also gave us some free hot chocolate, noticing that we were sopping wet and rather cold; a very nice gesture that said to me ‘see, we aren't all crazy here in Arizona.'

As we made the long trek home, I thought of some of the bad luck we ran across this trip. The food poisoning, the rainout, the loss to the A's, the strange folks we stumbled upon. But all in all I loved the atmosphere of Spring Training, the excitement of Giants fans for the upcoming season, seeing the hard work the players put in day in and day out, and the pure love of baseball fans such as myself who spend their time and money to watch ballgames that don't even matter. Can't wait for next spring already.