Brian Wilson has been known for his over-the-top antics the last few years. Whether it be his legendary and iconic beard, world-class post game interviews, or Taco Bell commercials, it's tough to go a few days without seeing The Beard on a television set near you.

Perhaps the wildest (and probably most dangerous) thing Wilson has done is wear an entire LSU uniform on College Game Day. In Tuscaloosa, the heart of football country, it takes a brave man to wear a rival's uniform and headgear.

We have the picture of Wilson and his LSU uniform... 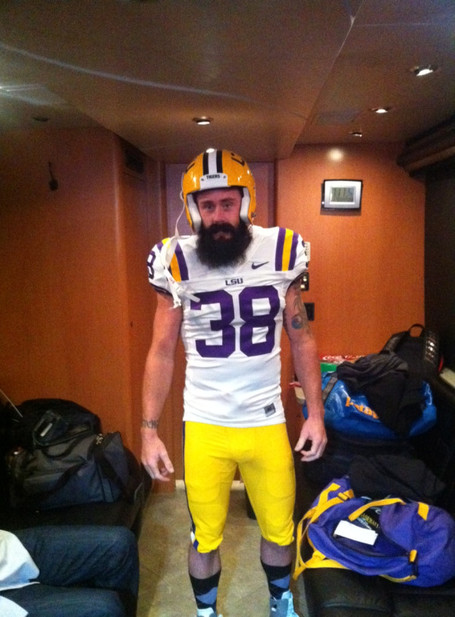 Wilson proceeded to bring out and play a trumpet, as well as put on a bearded LSU Tiger head. Lee Corso agreed with the closer, though Kirk Herbstreit picked the Crimson Tide to win on Saturday evening.

For what is being billed as, "The Game Of The Century", we're off to a great start with Brian Wilson and the Game Day crew.