Share All sharing options for: Tim Lincecum One Of Sports Illustrated's 10 Most Memorable Athletes Of 2010

Tim Lincecum was the main headliner of this year's SI photoshoot highlighting the 10 most memorable athletes of 2010. Lincecum was the most visible face of a San Francisco Giants team that surged toward their first World Series title since they moved to the city by the Bay.

It's a list that includes such headliners as Manny Pacquiao, Landon Donovan, Drew Brees, Kevin Durant, Kelly Slater, Shaun White, Kim Yu-Na, Dustin Johnson and Alexander Ovechkin. But did any of them grace the cover the way Lincecum did? I think not. Giants fans I'm sure are now all praying the SI Jinx does not strike with an errant popped wine cork.
Check out the exultant Lincecum cover after the jump. 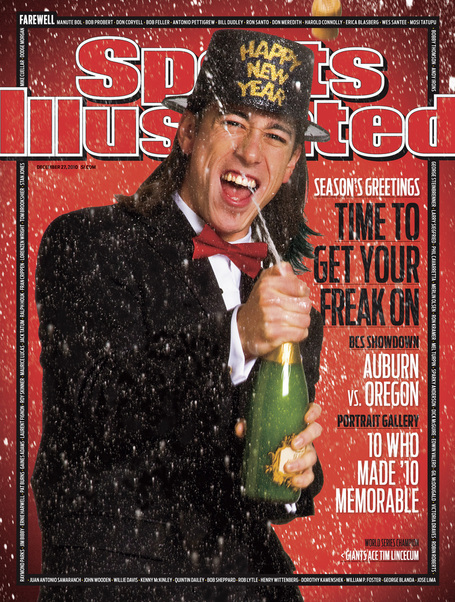 For those who are ignorant on the "Giants winning the 2010 World Series" matter, let's catch you up on Lincecum's accomplishments.

The Freak had an average 16-10 record with an average 3.43 ERA (average for him at least), but most of those were due to August struggles. Lincecum was money down the stretch, going 5-1 with 52 strikeouts, 6 walks, captured his third consecutive NL strikeout title. He struck out 14 in his postseason debut in the NLDS against the Atlanta Braves. He outdueled Roy Halladay of the Philadelphia Phillies in Game 1 of the NLCS. He wrapped things up by beating Cliff Lee of the Texas Rangers in both of his two starts in the World Series, including the series-clinching Game 5 in Arlington, giving up three hits, striking out ten in eight innings. Not too shabby.