One of the fun little perks of winning the World Series is the winning franchise gets slapped across the front of Sports Illustrated. The latest edition of Sports Illustrated is out for purchase and I’d imagine Giants will want to hop all over what automatically becomes a collectible (I still have my SI issues from the UNLV Rebels Championship Run!).

“The Giants became the first team since the 1966 Orioles to throw two shutouts in the World Series, giving them four for the postseason. Only two other teams, both legendary, ever threw that many in a postseason: the 1998 Yankees, winners of a record 125 games, and the 1905 Giants, the franchise’s first championship team. It was in that dead-ball environment a century ago when Christy Mathewson and Joe McGinnity won all four Series games with shutouts. Consider them the forefathers to the Big Four more than a century later. This Giants’ title bore a striking resemblance to the first: Pitching was made cool again.”

And of course Brian Sabean, who has been raked over the coals in recent years due to some of his dealings can finally step forward with a big fat I Told You So:

“If [Giants general manager Brian] Sabean bore the look of a proud papa, it was because the World Series became a graduation ceremony for his young pitchers. In every game this postseason San Francisco sent out a starter who was signed and developed by the organization and was no older than 27. No other team had ever pulled off such a feat since the draft was instituted in 1965. To find that many homegrown starters in a World Series that young, you have to go back to 1956, when the Yankees started Whitey Ford, Dan Larsen, Tom Sturdivant, Bob Turley and Johnny Kucks. During the postseason the Giants were slump-proof because of that rotation. They never lost two games in a row, and the starters’ ERA in four games following a defeat was 1.11.” 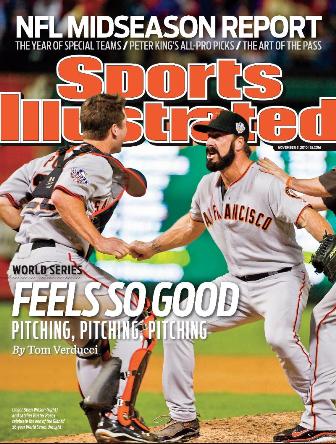