First the Braves got "unlucky" because the bats went cold against San Francisco in the NLDS. Then the most powerful lineup in the National League couldn't generate much of anything when it counted as the Phillies fell in six. Then the Texas Rangers couldn't even bat .200 as they got closed down in five.

Strange how "unlucky" teams get when they face the Giants. Coincidence much?

J.T. Snow says it all. John Shea got this gem of a quote.

With all due respect to the guys in ’02 . . . if we had this friggin' staff, we’d have beaten the Angels four straight.

(courtesy of Mdizzle138 of McC)

Tim Lincecum struck out 14 Atlanta Braves to start the season, and finished off the World Series with 8 innings of 3 hit, 1 run, 10 strikeout baseball. It was fitting that the Freak was the man flaming out the hopes and dreams of the Rangers in Game 5. (Kudos to NuschlerFace of McC)

The more said about Matt Cain, the better: He finished off his remarkable campaign with 20 1/3 innings of scoreless playoff baseball. He ended up with only two out of three wins. That is above average for a guy who has received cursory run support his entire career--he would probably win only one of these three a year or so ago. The underrated hero deserves all the dap he can get. 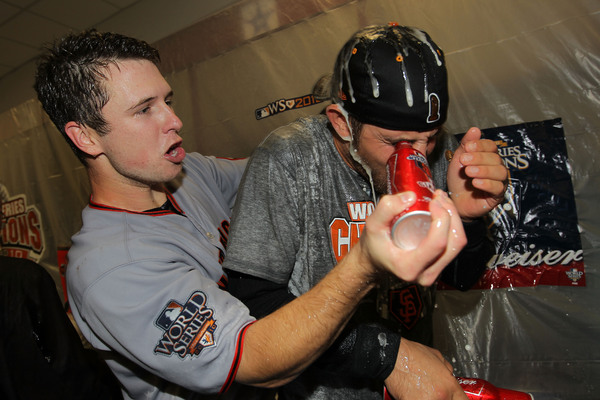 And when Jonathan Sanchez struggled, Madison Bumgarner picked him up, first in Game 6 of the NLCS, and then in Game 4 of the World Series with one of the greatest pitching performances ever by a rookie. 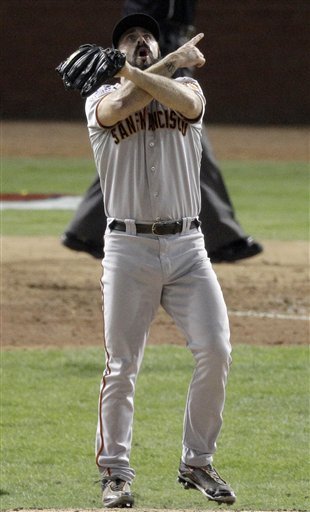 Finally, Brian Wilson somehow outshone his beard and did not give up an earned run, had three saves, and won the critical Game 4 matchup in the NLCS. Add in an incredible bullpen that pitched an amazing Game 6 in Philadelphia to close out the Phillies, including Javier Lopez who shut down Philadelphia's lefties throughout the NLCS, and you have all the right ingredients for an outstanding pitching staff that wheeled and dealed from September to October.

• The Giants went 18 straight games allowing three runs or less in September, which was the longest such streak in Major League Baseball since 1917.
• They continued that success by allowing three or less in nine of their 15 playoff games.
• Four of those game were shutouts — two coming in the World Series against a Rangers offense that led all of baseball in team batting average during the regular season. Their World Series average was .190. Lights. Out.
• We can also confirm their 2.47 postseason ERA is really good.

Edgar Renteria won the World Series MVP, and deservedly so, but they'd better be building some sort of monument to the 2010 Giants pitching rotation, which carried them all through the critical stretch run to the playoffs.

And probably most impressive of all? They're all homegrown. They become the first team to start four pitchers in the World Series that were theirs from the beginning since the '86 Red Sox, and the first to win since god knows when. The only vet in the rotation, Barry Zito, didn't even make the playoff roster. These young Giants stepped up and shut down.

(Another image from the immortal Natto)