I gotta admit, I have very little idea as to why Bieber is as popular as he is. I've rarely listened to his songs, and I don't think I could name one off the top of my head. He seems talented. He seems intelligent. He seems personable. So whatever.

But this week I couldn't avoid him. All I want to do is watch sports, and the Bieber won't leave me alone. First he shows up to the Laker game and borrows Jeanie Buss's ring for a half. Why? Because you must feed the Bieber, or he will sick his absolute crazy fans on you. Kobe-lovers could learn a thing or two from the Mad Max JB fan club.

Now he's apparently going to debut his new music video for "Never Say Never" at Game 3 of the World Series. Because really, there's no better demographic for Bieber to target than the grandparents of the kids who download his songs on iTunes.

But what really irked me was his get-up when he made the announcement. 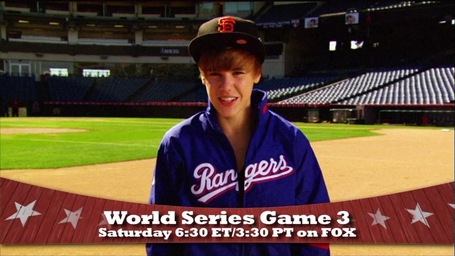 via www.mocksession.com (H/T to bubbaprog to creating it & TimLinCyYoung of McCovey Chronicles to finding it)

Giants hat and Rangers jersey? Waffle much? More importantly, aren't you supposed to be a DODGERS fan? What's up with this?

Bieber, I know in Canada they believe in friendliness and socialism and death camps or whatever, but this is America. We hate ties, we hate the better team winning, we hate all of that sportsmanship business. Pick a side and stick with it.

The worst part is the kids who rabidly follow him around will still eat this up. You are a formidable opponent Bieber.