Cal alum and Green Bay Packers quarterback Aaron Rodgers had a funny bet that he had to back out of on Tuesday. Apparently Rodgers had decided to make a bet with his buddies Boyz II Men in order for the R&B singers to do the national anthem at Lambeau Field this past weekend. If the 49ers lost to the Packers, Boyz II Men would wear Packers jerseys this week. If the Packers lost to the 49ers, Rogers would wear a 49ers jersey through this entire week.

Well, the Packers lost. Would Rodgers follow through? Apparently not.

But earlier today, Rodgers addressed the media -- and when he was asked about the wager, he sounded like a man trying to get out of donning his rival's jersey.

"There's nothing to that," Rodgers said ... adding, "That got blown way out of proportion."

I'm guessing that some of you might be angry with Rodgers for not following through, but there are probably certain issues (like wearing an opposing team's jersey) that might have rubbed the Packers organization the wrong way. So this little bet had to be shelved. Either way, it would have been funny and awesome for Rodgers to follow through on this bet. Too bad.

What you should be angry with is this hideous TMZ headline. 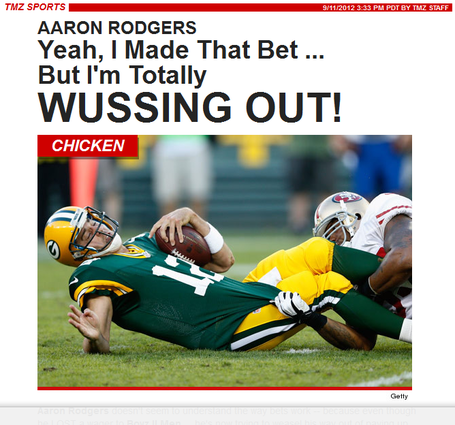 Talk about the Rodgers bet with 49ers fans at Niners Nation, and with Packers fans at Acme Packing Company.