Sneaking Into the 2012 NFL Draft at Radio City

In this article, we discuss the experience of the 2012 NFL Draft from a 49ers writer and enthusiast who had to find an unorthodox way in. For more on the 49ers, visit Niners Nation

Share All sharing options for: Sneaking Into the 2012 NFL Draft at Radio City

For those of you who follow me on Twitter understand the stress and frustration I had regarding the attendance process for the 2012 NFL Draft. For some reason the NFL decides to not sell tickets for which thousands of fans would purchase, but instead make people wait in theme park sized lines in the middle of New York City during a week day until 12 o'clock at night.

And that line is the line preceding the line you'd have to wait in the following day. That's correct, the first line is only for a wristband - you have to return the next day with the wristband and wait at least another two and half hours to secure a ticket.

I live in the New Jersey and was able to hop a train from my town to Penn Station with hopes that if I was persistent enough, I would get in. I arrived Thursday night to find out that W 50th and 6th Ave was an absolute circus in a 2-3 block radius in every direction. The NFL had police shut down and redirect not only the cars on the street, but all of New York's residents that were walking down that particular sidewalk.

New York City's finest were patrolling the area, as is the case when such a major event is put on in the city. On night one, I couldn't even get on the same block as Radio City without a ticket, 1Iota printout or media credentials.

The first night was a bust. But I was down, not out.

After staying the night at my cousin's in Manhattan, I journeyed back over to the Radio City area that was already buzzing with activity. I had a meeting with an NFL scout as well as a radio and TV personality with the Indianapolis Colts and the NFL. In my time in the area speaking with them, legends like Gil Brandt and Bill Polian rubbed shoulders as they passed by me.

At this point I have no wristband, no ticket and I've finished my meetings. I'm at Radio City, the draft is set to continue in a matter of hours and all I want to do is get inside.

There are four separate lines on both sides of the building. The lines are the width of the sidewalk, shoulder-to-shoulder and not 49er friendly. I dive into the sea of Giant blue and Jet green, with the occasional Tom Brady jersey mixed in. I nonchalantly cut about 350 people, sneaking into one of the bigger lines closer to the entrance.

After which, I waited three hours before the line started to move. This is when I realized that I am eventually going to get to the front of the line, but have no ticket or coupon print out to prove I'm supposed to be there. But in my defense, if they made it easier to acquire tickets, I might not be taking these desperate actions.

We get to the front of the line and I see the first security guy is checking both tickets and any bags. Since I took the train from New Jersey, I had a backpack but no ticket. I figured I might as well work with what I've got and just unzip my bag for him.

I tailed a group of six pretty closely who were adamant about going in as one, and blended in more or less. I open my bag for the security guard, and he lets me pass under the assumption I was with the group. 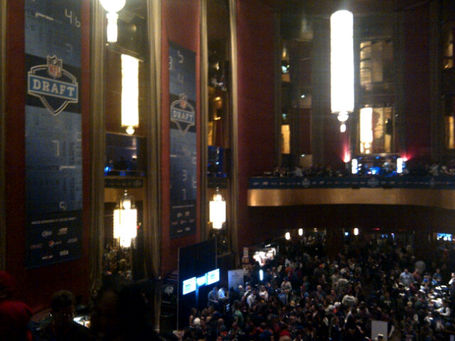 I have gained entrance to Radio City on day two of the draft. But at the door inside, they were scanning tickets to get into the main hall - but I still didn't have a ticket. I told the girl at the door that I was meeting someone inside who had my ticket, but she said I should just grab one from the table inside.

At the front table, there is a holy grail of draft tickets where people who have reserved them via the many mysterious ways online could claim their tickets. Since I had gotten this far, the girl had assumed that I had the paperwork and I was given a ticket.

I stayed for round 2 of the draft where the 49ers were selecting near the back half. Not long after I took my seat nearby the stage with Mike Mayock, Brian Billick and Rich Eisen, draft guru Todd McShay had walked up the ramp right past me. He wasn't interested in conversing with any of the fans shouting his name at that time. 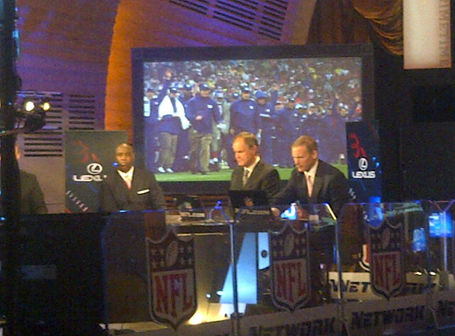 With the 61st overall selection in the 2012 NFL Draft, the 49ers selected LaMichael James. My reaction immediately was excitement. Not only did they call a familiar name, but someone who dominated his position for his entire college career.

Since I was wearing a 49ers hat, some other NFL fans chatted me up when the pick was made. A lot of them were surprised, mentioning Frank Gore's name, but thought it was a good pick because of the added explosiveness. I liked the pick then and I like the pick now. 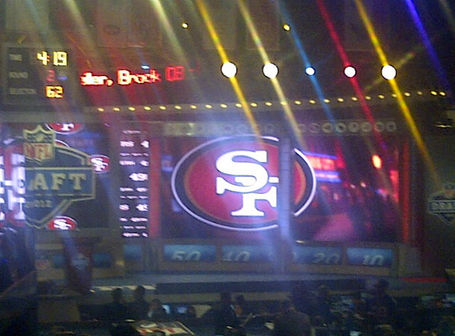 It was an exciting couple days to say the least, but hopefully next year the NFL change how they distribute tickets, or I might just have to sneak in again.