New Nike NFL Uniforms: 49ers Away Jerseys Are Snazzy, Cleats Are 'Eh' And Alex Smith Is A Dark Lord

Share All sharing options for: New Nike NFL Uniforms: 49ers Away Jerseys Are Snazzy, Cleats Are 'Eh' And Alex Smith Is A Dark Lord

We've already taken a look at the new uniforms for the San Francisco 49ers, as done by Nike as per an NFL-wide re-design of its apparel. There's good (most of it) and then there's bad (the gloves), but there's still a couple things that need to be looked at. For one, we'll take a look at the away jerseys, which are just lovely, probably because they're not yet stained with grass and dirt and things of that nature. The red is a bit "fuller" than the previous, and it works very well with the white. 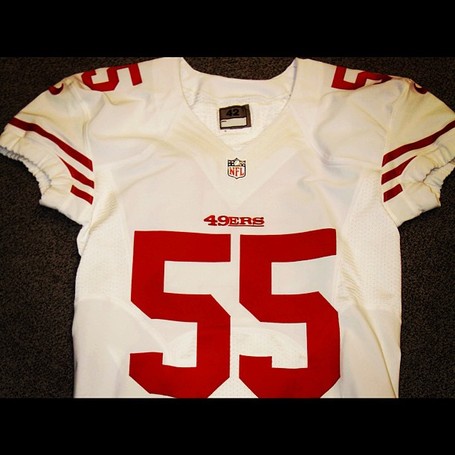 That being said, there's another aspect of the new uniforms that isn't quite as good, in this writer's opinion. Also introduced on Tuesday were the new cleats, which are gold and ... maroon? The red on the cleats is far, far from desirable, but it's worth noting that they look a bit better with the full uniform. Up to full scrutiny though, the red just doesn't hold up, and it's far too much of a reminder of the 2000s 49ers uniforms in which they abandoned the classic red.

It's also pretty funny that players have been fined exorbitant amounts of money in the past for having shoes with too much flair to 'em. But Nike is allowed. Again, the link for the new cleats is here.

Lastly, if you wanted to see how Nice Guy Alex Smith looks in "I'm gonna eat your heart" mode, look no further than the heavily modified picture Tweeted by the 49ers here. That's an actual thing they're using to promote. The first thing that's noticeable is that the darker socks look really, really, really cool.

The second thing that's noticeable is that Alex Smith's thighs rival those of Chun Li from Street Fighter. It's not just the pads, either -- that's some glorious airbrushing going on there. They also took liberties with the muscles on his arms, and of course, enlarged his hands so they actually look normal holding a football. He really does have tiny hands.

This writer's guess is that Smith took a picture without a football and a helmet, and was smiling politely while saying "Absolutely" over and over and, 10 minutes after they got the picture, this happened. The things you can do with internets!