Although the internet is exploding over the radical changes the Seattle Seahawks underwent with their new jerseys under the new Nike apparel line, every team in the NFL is getting at least some kind of change. While we'll have full looks at the jerseys for the Oakland Raiders and the San Francisco 49ers shortly, there's one thing important we need to touch up on first.

Surely, you've seen this image over the last couple days - it's got a bunch of new gloves from the teams, courtesy of Nike. For the San Francisco 49ers, their's looks pretty decent, nice red and gold, good logo, a bit of flair to add to the swag. A solid entrant into the lineup, right? Make the jump for a reality check, but not the Roddy Piper kind because I'm not gonna put you in a sleeper hold.

That's ... that's just wrong. So very wrong. I'm not sure if the players will be required to wear these, or if they're the only gloves allowed, or even if they're just for fans to purchase, but a close-up of the gloves reveals ... something much worse. It's less gold and much more yellow, and the pattern is inconsistent across the digits. I guess that was by design, but at what point did seguing from Bill Cosby argyle into jagged lines seem like a good idea? Here's the image below. 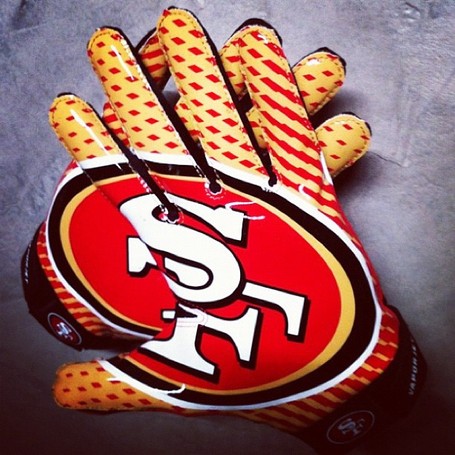