Nike was set to unveil the new uniforms for all 32 NFL teams at 11:00 a.m. eastern on Tuesday, but apparently misled everyone - mostly the NFL Network - who had tweeted about showing the event live. Then again, things got started shortly after (not exactly on schedule, but you know). At any rate, the San Francisco 49ers weren't expected to have major changes across the board.

Shortly after it all began, we got a much better close-up image of the gloves that the 49ers players would be wearing. As you can tell, they're not well-received by this writer in particular, but we'll move on from that. There were some initial pictures that showed a little bit of the pants details, of which you can find here.

Then, the 49ers posted a picture of the jerseys on Instgram, and though the sleeves look ridiculously short, it's an indication that not a ton is changing: 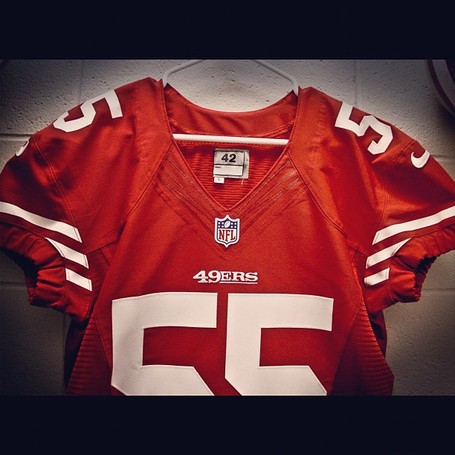 And then, finally, a closer look at the model for the 49ers came out via Darren Rovell, so that's below as well.