Twitter is super weird. Beyond the actual functionality of the thing and the borderline-inexplicable reason for it existing, a lot of the inner workings of Twitter are just flat-out weird. There are fake Wiz Khalifa and Family Guy accounts with tens of thousands of followers, but the weirdness gets deeper: for a nominal fee, you can pay to have those accounts tweet out whatever you want to all of those people. So yeah, weird. And that's not even getting into people who don't know the Titanic was an actual boat that sank in real life. But Twitter isn't just confusing for us mere mortals. Even sports superstars can get confused by the new technology.

Our very own James Brady was able to get a screen shot of the following Vernon Davis tweet in his MetroTwit timeline. It's the one on the bottom here, so read from the bottom up for the full effect: 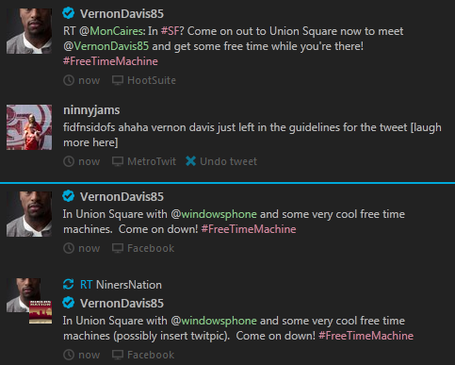 It appears that the San Francisco 49ers tight end was doing a promotional appearance in the city and his handlers/PR people/whoever passed along the latest "SHILLIN' A SMARTPHONE OVER HERE, BOSS" tweet with instructions included. Whoopsie-dunkles!

Luckily, Davis was able to delete his flubbed tweet right away and send out a corrected version before going on about his business, like a cat that falls off a table and then tries to fake like it wanted to get down on the floor to clean itself, anyway. But we caught it (possibly insert jokes here).

All in all, the most confusing thing about all of this is what the hell the Windows Phone is attempting to accomplish with the whole "free time machine" thing. Hopefully some people went down to Union Square who actually thought Vernon Davis was giving people free rides in a time machine, only to arrive and find no DeLorean. I bet those are the people who follow the fake Wiz Khalifa.

For all news and information regarding the San Francisco 49ers, please visit Niners Nation.