San Francisco 49ers wide receiver Michael Crabtree is a heck of an athlete, reportedly a nice guy and certainly a man of the people. But apparently he is not the guy who will help you score some drinks in the middle of the afternoon. Apparently, Crabtree was out minding his own business on Saturday when some youths decided to pull a "Hey Mister" on him, in pursuit of some Four Loko. Likely because they're eager to get drunk, but perhaps too eager to play it cool like they've got some self-respect.

Here is the information that Crabtree relayed on Saturday:

These 2 lil dudes came and asked me 2 buy them some 4 loco! They only 16..#thatscrazy. yfrog.com/mnea0vgj

Crabtree was kind enough to snap a picture of the two young gents in question. Here it is, just in case someone requests to have it taken down or something: 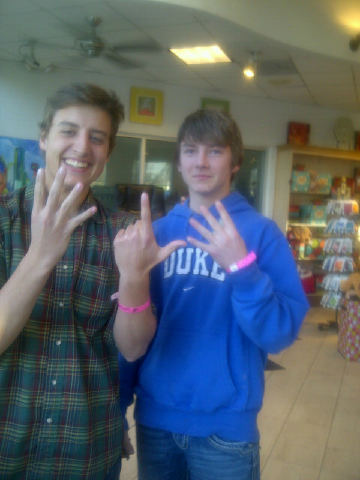 Now, granted, these kids probably didn't realize they were pulling a "Hey Mister" on Michael Crabtree, professional football player. But if they did, I would argue that's infinitely more awesome and ballsy. Perhaps it went something like this:

Crabtree: Haha, shucks. Well, thank you very much. I appreciate that.

Youth 1: Would you buy us some Four Loko?

Crabtree: you want me to buy you guys beers

Youth 2: Yeah, Four Loko is like candy. You know, because we grew up drinking Red Bull and Monster Energy Drink, so we think that shitty acid-tasting beverages are like what chocolate milk must be like to your generation.

Crabtree: Did you just throw up a gang sign for an energy beer

Youth 2: Yeah woooooooo /flashes "4 Horsemen" fingers but is too young to know what that means

Crabtree: Lemme get a picture of this.

Anyway, that's how I like to imagine it. I'm sure we'll never know. Either way, well done, Michael Crabtree. Two fewer delinquent youths aren't chugging gross booze-type drinks today, all because of you.

For all news and information regarding the San Francisco 49ers, please visit Niners Nation. For info on where you can, you know, score us some brewskis, just be cool, man. Be a bro. Don't be like that.