Not only does San Francisco 49ers head coach Jim Harbaugh ride coach to the NFL Combine, he does the yeoman's work of team equipment managers at University of Indiana Hoosiers basketball games during team timeouts. Seriously.

Make the jump to see for yourself.

Harbaugh's brother-in-law is Indiana head basketball coach Tom Crean, and was in attendance for Wednesday's game against the North Carolina Central Eagles. Here is Indiana sports writer Jeff Rabjohns with the play-by-play on Twitter of Harbaugh furthering his already legendary blue collar status:

49ers coach Jim Harbaugh is sitting with the IU team managers during the game, hustling out doing team manager work during timeouts.

Jim Harbaugh has to be the 1st NFL head coach I've ever seen set up chairs for a college basketball team during a timeout, carry off after.

Gotta check with @BTNTomDienhart but 49ers coach Jim Harbaugh may be the wealthiest team manager in B1G basketball history.

Don't know if that really needs a check; I think it's safe to say he is by a long shot.

Still don't believe me? Here he is, via Pete Oren on Twitter: 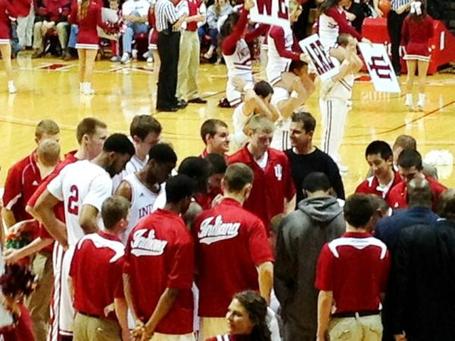 I'd be willing to bet that black sweatshirt is tucked tightly into his khaki's; the standard Harbaugh work outfit. That is until the final whistle sounds when he will proceed to untuck emphatically to signify his hard day's work is finally done.

For more on the 49ers, check out Niners Nation.