The San Francisco 49ers lost the NFC Championship Game to the New York Giants, and understandably Kyle Williams took the brunt of the punishment for his two fumbles that turned into 10 Giants points. Almost everyone knows that San Francisco would probably have been in the Super Bowl if Williams handles those two punts. Still the vitriol was at an all-time high after Sunday's contest.

So it's good to see the best perspective emerging from the youngest of individuals. Ben Mankiewicz of the Huffington Post reports that seven year Owen Shure wrote this letter after listening to the wise words of his father. View it after the jump. 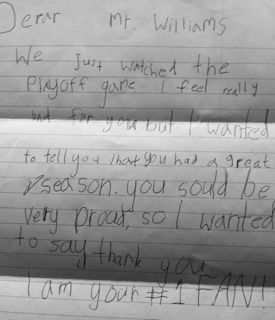 For those having trouble reading the text.

We just watched the Playoff game. I feel really bad for you but I wanted to tell you that you had a great season. you sould be very proud, so I wanted to say thank you.

Indeed. And I think you just became the number one 49ers fan for a lot of other people Owen. Mature stuff from a wonderful kid, and you've got to love the dad here showing his son what compassion is all about.

To discuss Williams and Shure with 49ers fans, check out Niners Nation.