The San Francisco 49ers picked up an early first down on a nice Frank Gore first down thanks to a great cutback run against overpursuing New York Giants defenders, but the drive eventually stalled after an Alex Smith incompletion on third down. The Giants picked up a few first downs with connections between Eli Manning and Victor Cruz as well as Hakeem Nicks, getting the ball close to midfield. But the 49ers defense held up with a sack-fumble of Manning to force a Niners punt.

And when San Francisco got the ball back, Smith went right to work and found Vernon Davis. 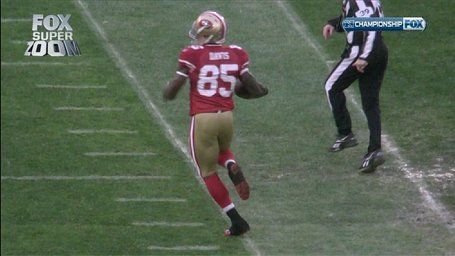 But after review, the officials let the call stand as the evidence was not totally conclusive. Davis did get flagged for unsportsmanlike conduct and excessive celebration after posing on the camera stand, but the Giants were stopped on their next drive, so no harm done.

San Francisco is up a touchdown early in the NFC Championship Game.

To discuss the game with 49ers fans, head to Niners Nation. To talk about he game with Giants fans, go to Big Blue View.