The San Francisco 49ers and the New York Giants share quite the lengthy history against one another. On Sunday, the two teams will add another chapter to their storied rivalry as they square off at Candlestick Park in the 2012 NFC Championship Game. Surprisingly, a New York landmark decided to show its support for the West Coast football franchise in an interesting way.

The following photograph comes to us courtesy of Twitter. See for yourself how the Empire State Building chose to adorn itself earlier this week: 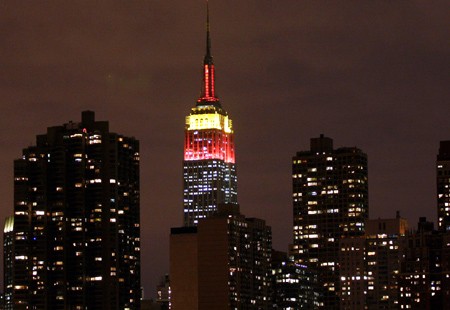 The familiar red and gold of the 49ers, blazing bright for all to see in the Big Apple. We don't have the context for why the skyscraper was decked out in this way, but can there be any doubt? The Empire State of mind is clearly focused on a San Francisco victory.

For all news and information regarding the San Francisco 49ers, please visit Niners Nation. For updates and perspective on the New York Giants, head on over to Big Blue View.