PHOTO: Matt Kemp Has The Audacity To Root For His Favorite Football Team

Share All sharing options for: PHOTO: Matt Kemp Has The Audacity To Root For His Favorite Football Team

The Twitter world was torn asunder on Friday when images popped up regarding Los Angeles Dodgers outfielder Matt Kemp wearing a specific item of clothing pertaining to a certain Bay Area sports team. Namely, a football team that just might be hosting its first playoff game in nearly a decade on Saturday. Luckily, Bay Area Twitter fans were quick to take Kemp to task for this egregious display of supporting his football team. The offending images are after the jump. 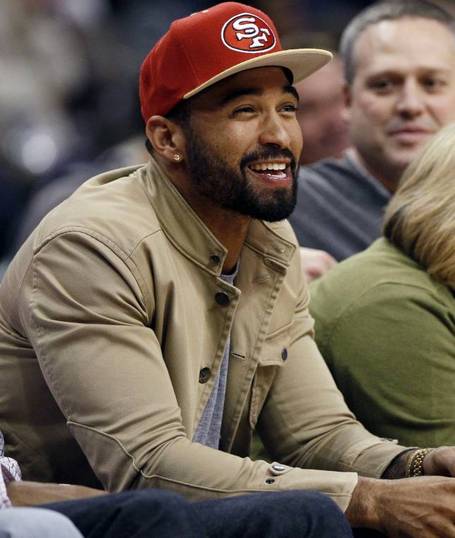 I mean, the unmitigated GALL.

The official Twitter feed for San Francisco Giants Fans appeared to take particular exception, taking it upon themselves to make an on-the-fly alteration to the offending images: 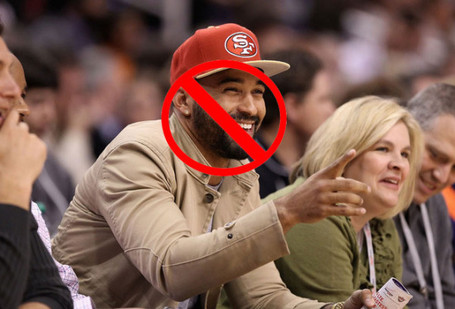 Look, I know I'm something of an anomaly as a San Francisco Giants fan, or I guess as a sports fan in general, in that I both recognize the completely arbitrary nature of rooting for a specific sports team, or holding an allegiance to whatever geographic location you happened to be born in. I'm further a weirdo by not unilaterally despising a human being just because they wear a different shirt than do the guys on my favorite team. But come on now.

1. The dude is, by all accounts, a very long-time fan of the 49ers. Is he expected to give up all of his past allegiances just because he plays for a team in a "rival" market? Wouldn't that be much more worthy of derision than him being a fan of a Bay Area team?

2. Los Angeles doesn't so much -- what's the word? -- ah yes, "have a football team," so don't begrudge a guy for rooting for a team he doesn't have any ulterior motives in rooting for.

3. Matt Kemp is an amazing baseball player. Like seriously, one of the very best playing the game right now. Furthermore, he seems like a truly nice guy and, unlike some other MVP vote-getters, hasn't failed any drug tests to date. Why can't we just be happy to add a famous and cool person to the number of excited Niners fans?

Sheesh, let a fella wear a hat, you guys.

For all news and information regarding the San Francisco 49ers, please visit Niners Nation. For updates and perspective on the Los Angeles Dodgers, head on over to True Blue LA.