PHOTO: Another Person Has All Of Joe Buck They Can Stomach

Share All sharing options for: PHOTO: Another Person Has All Of Joe Buck They Can Stomach

The San Francisco 49ers are in St. Louis for their Week 17 game against the St. Louis Rams. While in town, the players decided to stop by a local eatery and see what was on offer. The restaurant they decided on was Joe Buck's, which, amazingly, is a restaurant owned by sports announcing "personality" Joe Buck. One of the rookie players for the Niners saw something on the menu that caught his eye and just had to give it a whirl.

Mike Person, a rookie offensive lineman for the 49ers, hit up an item on the Joe Buck's menu called the "Big Buck BBQ Challenge." The item consists of a half-pound of cornbread, a half-pound of pulled pork, a half-pound of brisket, a half-pound of turkey, four smoked chicken wings, three ribs and something horrifically referred to as "one giant 'Smoky Bone.'" The world was tipped off to the impending challenge thanks to a tweet by Niners lineman Daniel Kilgore:

You can read more about the one-hour challenge on the full menu PDF by clicking right here. Please take a moment to follow that link, because the cover of the menu features the terrifying visage of Joe Buck in punishing high definition. Also curious is the menu's boast that Joe Buck's restaurant is "Now Featuring Joe Buck's BBQ." I guess anything is a step up from just featuring Joe Buck.

Fellow offensive lineman Adam Snyder was kind enough to pass along a picture of the meat pile: 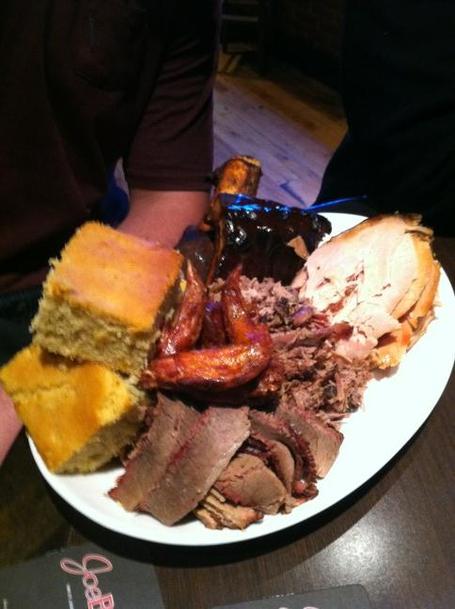 Left tackle Joe Staley also passed along a picture of Person shaking hands with the chef at Joe Buck, as though shoveling mass quantities of meat heaps onto an oversize plate is akin to earning a Michelin star.

If any member of the San Francisco 49ers was going to attempt to eat four pounds of food in an hour the night before a game, it's probably for the best that it was Person. Besides being a young guy and playing a position that is no stranger to consuming obscene amounts of food on a regular basis, Person has spent this year on the 53-man roster but has been inactive for each week of the 2011 season.

An update from Kilgore followed shortly after:

@DanielKilgore67
Daniel And he failed...
Jan 01 via Twitter for BlackBerry®FavoriteRetweetReply

Well, that's just pathetic. You had one thing to do in St. Louis, Mike; to eat a gross amount of food and win a Joe Buck's T-shirt to the delight of your teammates. As far as eating challenges go, this one looks really mild. Maybe he cornbread did him in, or maybe his heart just wasn't in it. Or maybe you tend to lose your appetite when the ghastly specter of Joe Buck is leering at you from the back of every menu in the joint.

Actually, that last one makes the most sense.

For all news and information regarding the 49ers, or to brag about how much food you can eat in one sitting, please visit Niners Nation.