The San Francisco 49ers aren't facing an formidable foe today against the St. Louis Rams, so it's important that they stay healthy through this contest. Unfortunately, Patrick Willis might have suffered a pulled hamstring midway through the first quarter. Here he is clutching it during the game. (HT jose3030 of Twitter) 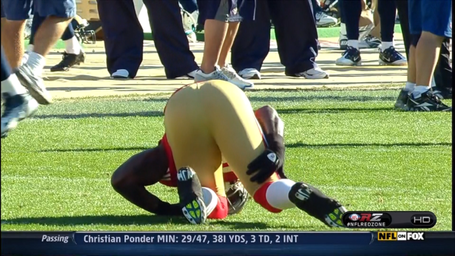 Willis is doubtful to return.

The 49ers do have points on the board to start things out. Alex Smith connected with Michael Crabtree, Vernon Davis, Kyle Williams and Ted Ginn, Jr. to set up an early David Akers 36 yard field goal. The Rams have A.J. Feeley at quarterback, but St. Louis has only two first downs through the first quarter and the 49ers defense remains the best unit on the field. The Rams have to prove they can move the football down the field before the Niners can start feeling concerned about their hopes at winning this one.