The San Francisco 49ers are preparing for their Week 16 game against the Seattle Seahawks. That game will take place on Saturday, or as it's known locally in Seattle, "Christmas Eve." The Niners are still chasing the No. 2 playoff seed and are riding high after defeating the Pittsburgh Steelers in a dominant showing on Monday Night Football, despite having to play the entire game in complete darkness just to prove a point.

San Francisco is the easy favorite in the game against Seattle, but they're not above sneaky and questionable secret tactics to get that win. Unfortunately, one of their employees may have unwittingly tipped their hand on Monday.

Taylor Price, the 49ers Digital Media Coordinator, sent out a message via Twitter on Monday afternoon, bragging about the great "snacks" that are available in the lobby. The tweet was accompanied by the following image: 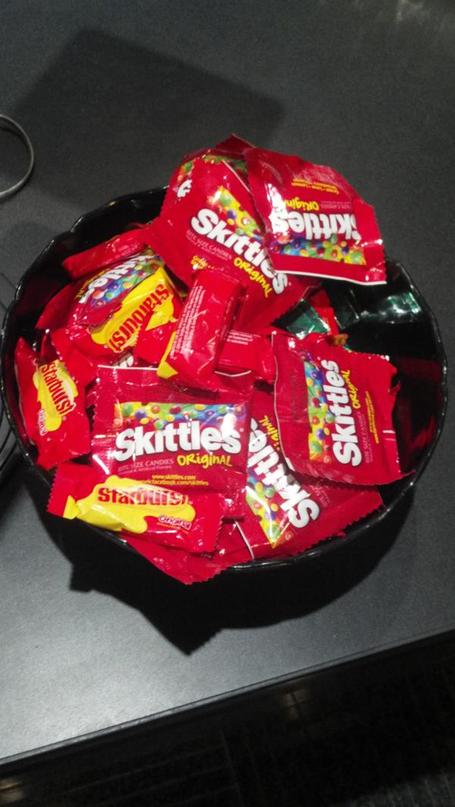 You fool, Taylor! Those aren't merely just some snack! Those are the key to San Francisco's penultimate victory on Saturday!

If you're not following the Seahawks too closely this year, their key offensive weapon has been running back Marshawn Lynch. Lynch has been known to break out improbable touchdown runs, but has a specific Achilles heel: his well-documented and lifelong love of Skittles bite-size candies. He's even managed to parlay his affinity for the fruit-flavored treat into some official Skittles endorsement.

The 49ers have been paying attention and by the look of that Twitpic, they're taking notice. Our super-secret sources did some sleuthing and they've come up with the inside dirt.

Apparently, Jim Harbaugh has requested ten cases of Skittles that will travel to Seattle with the team. During the game, defensive linemen will throw handfuls of Skittles in Lynch's direction in hopes of distracting him and/or forcing a fumble. Should that prove ineffective, Harbaugh has outlined a plan he calls "The E.T. Gambit" wherein a strategic trail of Skittles will lead down the field to a large pile of the candy in Seattle's own end zone. Should Marshawn be handed the ball, he will be powerless to do anything other than follow the trail in hopes of "tasting the rainbow." Once in the end zone, he should begin consuming the pile of Skittles, where he will be easy pickings to be tackled for a safety.

To find out what candy Frank Gore prefers, please visit Niners Nation. To discuss whether grape is the best flavor of Skittle (it is), head on over to Field Gulls.