The San Francisco 49ers certainly have their fair share of celebrity fans. Those fans are being a lot more vocal in 2011 on Twitter and elsewhere, and who can blame them? The Niners are on the verge of clinching their first playoff spot since 2002, and supporters finally have something to crow about. Their latest public supporter may be something of a surprise, however: West Newbury, Massachusetts native and WWE superstar John Cena. After the jump, you'll see a photo of Cena repping the 49ers and boy howdy, is it something else. 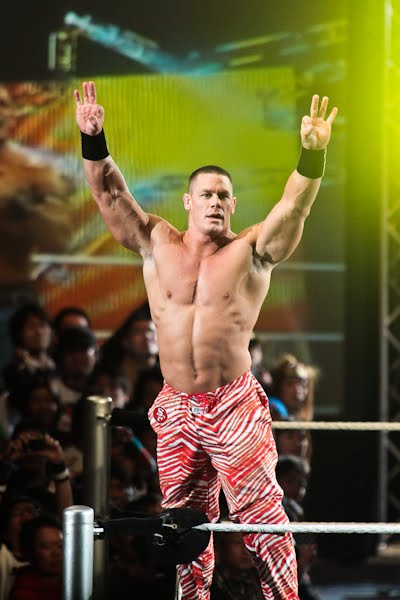 Yep, that's John Cena wearing a pair of San Francisco 49ers Zubaz pants. Cena recently transitioned from his customary denim jorts to the somehow-even-less-fashionable choice of camouflage shorts, but the much-maligned 90s fashion staple of Zubaz is a bit of a surprise. Although this is the second significant link between the 49ers and 1990s culture in recent weeks, why in the world would Cena be doing this?

The most likely explanation would be the traditional pro wrestling practice of "cheap heat." Often employed to garner favor with an audience in the easiest way possible, "cheap heat" refers to the referencing of a local event, location, or sports team for no other reason than to pander to the audience. For example, if the WWE is in Philadelphia, a wrestler may come to the ring wearing an Eagles or Phillies jersey, or point out a group of 76ers players in attendance. (The latter example is purely hypothetical, since no one is able to recognize any members of the 76ers, even if they live in Philadelphia.) "Cheap heat" also has plenty of non-pro-wrestling-related connotations, such as when you go to see a concert and the lead singer is all like, "What's happening, Mountain View?!" and the crowd cheers for absolutely no reason other than to celebrate that the band is aware of where they are.

So all of this Zubaz-ness would make perfect sense if the WWE were in San Francisco when this picture was taken. They weren't. They were in Japan.

John Cena rocked the Niners Zubaz in the land of the rising sun, and no one is really sure why. It probably all boils down to the fact that Cena is an enormous goofball who once dressed up like Vanilla Ice and frequently enjoys clowning around on non-televised events. There's a chance that he has no affiliation to the 49ers and this was simply the only pair of Zubaz he could track down on short notice in Japan. Still though, it's a fun gesture, and we always get a kick out of stripey workout pants.

Although it is worth nothing that this is a dude who thought jorts were cool for many years. He may honestly think Zubaz are awesome and hip. Hey, maybe he's right.

I know there have to be some of you who still have Zubaz in your closet somewhere. Break them out on Sunday and cheer your 49ers on to a playoff spot. Maybe John Cena will be cheering, too. (Insert joke about not being able to see him.)