Toronto Blue Jays All Star pitcher Ricky Romero is apparently a San Francisco 49ers fan. His birthday was on Sunday, and along with a 49ers victory, he received another Niners-related gift. He loved his gift so much that he was compelled to tweet pictures of it. Want to take a peek? 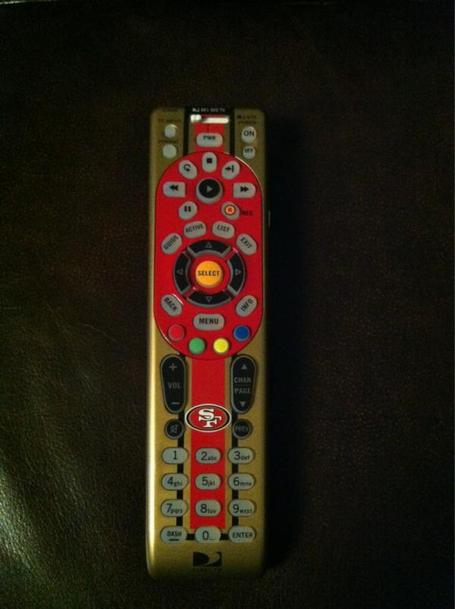 Yep. That's an official San Francisco 49ers DirecTV remote control, gifted to Ricky by his sister and her boyfriend. In case anyone was concerned about Romero forsaking America for the country of his baseball team, he's still very much into both football and television, and it doesn't get much more all-American than that combo. Here's the backside: 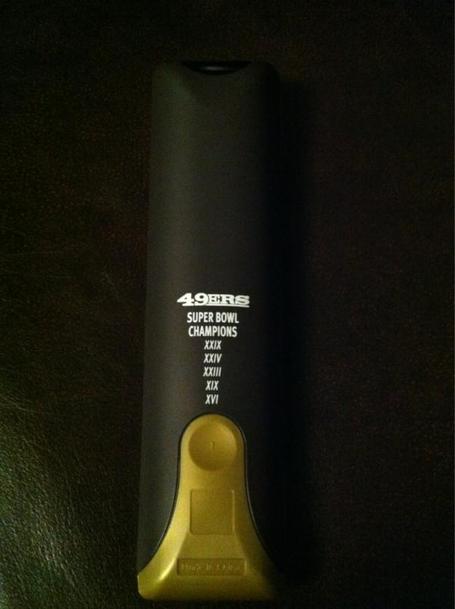 Romero suggested that the 49ers should add some more championships to that list. I'm sure the Niners would love nothing more than to comply, but wouldn't that render his fancy new remote obsolete almost immediately? He'd have to replace this sweet and thoughtful gift! I mean, I guess he could always try to squeeze another set of roman numerals in there using some Wite-Out or a Sharpie, but that might really affect the resale value of this cool piece.

(As a brief aside, when I first saw these pictures, I assumed that this was a custom, one-of-a-kind job, but it tuns out that these are officially licensed DirecTV remotes. You can get your own right here if you're looking to get some Christmas shopping done, provided you know your Secret Santa's favorite team and television provider.)

These pictures are cool for a number of reasons. To start with, it's really neat to think that a professional baseball player is jazzed about a favorite-sports-team-themed remote. It's also quite a testament to the power of the NFL that a guy born in East Los Angeles who graduated from Cal State Fullerton and plays for a team in eastern Canada is a die-hard 49ers fan. What's next, Jose Bautista revealing himself to be a Jacksonville Jaguars fan?

(Just kidding; no one is a Jaguars fan.)

You can always exchange gift ideas with your fellow San Francisco fans at SB Nation's own Niners Nation.