Bill Romanowski Calls Tim Tebow "The Only Virgin In The NFL"

Share All sharing options for: Bill Romanowski Calls Tim Tebow "The Only Virgin In The NFL"

Tim Tebow just cannot stay out of the news. I realize I'm perpetuating that issue right now, but nonetheless... I'll continue. Earlier this season, Tebow was in the news because of fans putting up a billboard calling for him to start in Denver. Then it was "Tebowing". Now... well there's this.

On a Friday appearance on Calling All Sports with Roc and Manuch on The Fan AM 1060 Phoenix, CSN Bay Area analyst Bill Romanowski stood up for Tim Tebow. Maybe. Or maybe he was making fun of him. It's kind of hard to tell with Bill, but you can be the judge.

SportsRadioInterviews.com transcribed a bit of the piece with the attached photo as an illustration of who was doing the talking, which I though worked pretty perfectly: 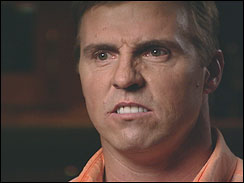 "Tim Tebow, I can't put him to sleep yet because he's the only virgin in the NFL. Okay? You can't hate the guy. For the guys that try to hit him hard and talk smack and stuff, he just looks at them and says ‘God Bless You.'"