PHOTO: 49ers 'Gang Tackles' Are A Sight To Behold

Share All sharing options for: PHOTO: 49ers 'Gang Tackles' Are A Sight To Behold

The San Francisco 49ers are going through a major resurgence. Following Sunday's win over the Arizona Cardinals, they are now sporting a robust 9-1 record and are giving Bay Area football fans a whole new reason to cheer. One of the major stories of this Niners renaissance is their powerful and dominating defense, which is giving sports photographers and fans of sheer spectacle a whole new reason to celebrate. Presenting: the gang tackle. 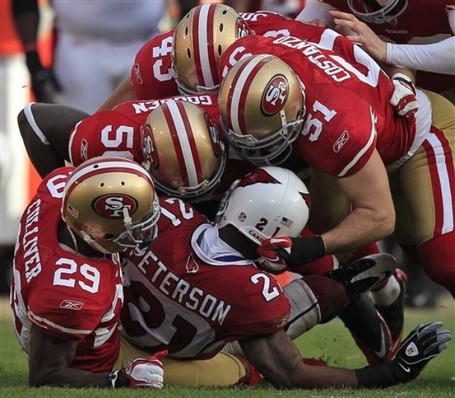 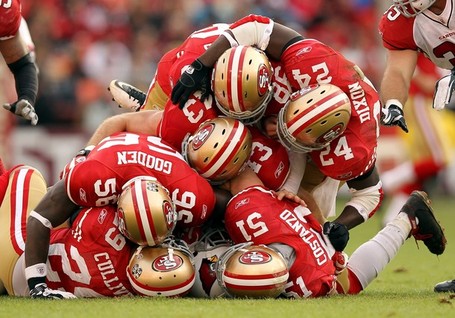 What you're seeing in these photographs is an absolute mugging of Cardinals punt returner Patrick Peterson following the unfortunate fumbling of a punt that led to his ultimate demise. The perpetrators in the act are CB Chris Culliver (#29), LB Tavares Gooden (#56), LB Blake Costanzo (#51), RB Anthony Dixon (#24), S Colin Jones (#43) and even long snapper Brian Jennings (#86) getting in on the act.

These photographs are pure spectacle in every sense of the word, an amazing reminder of the raw physicality of football and the overwhelming power with which it is imbued. A spectacular primer on why the NFL has been able to solidify itself as the most popular thing in America. It's the most artistic of train wrecks.

Weep not for poor Mr. Peterson, who knew the risks of stepping on the football field. His sacrifice will live on forever in these photos, and in the Patrick Peterson-shaped divot in the field at Candlestick Park.

For all discussions related to the destruction of opponents by San Francisco defenders, please visit Niners Nation.