The San Francisco 49ers and Detroit Lions played a hard fought game that has since been overshadowed by the post-game handshake incident. Now it might be overshadowed further by referee mistakes in the game. The referees, led by Mike Carey, had a tough game dealing with a variety of crazy plays and reviews including three separate key touchdown reviews. Add in some missed calls on holds and pushing off, and it was an overall tough day.

However, the poor decision-making took a turn for the truly bizarre as the refs somehow made a mistake in spotting the ball late in the fourth quarter following a punt return. Ted Ginn Jr. returned a punt 40 yards and the 49ers began what would prove to be a game-winning drive from the Lions 35. If you check out some screen shots after the jump, Carey's Crew made a sizable mistake that very well might have cost the Lions the game. 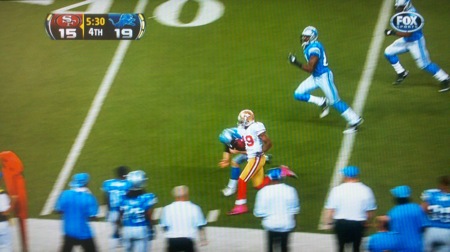 I couldn't get a good shot Ginn as he went out of bounds showing the 40, but basically he went out just after this play, crossing out at approximately the 40-yard line. 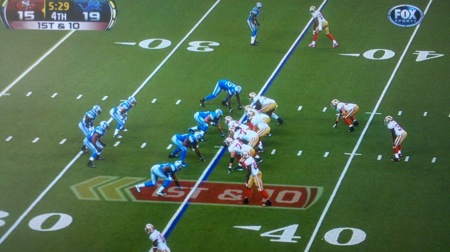 This is the ensuing first down possession for the 49ers at the 35-yard line. Huh?

They refer to football as "a game of inches" and this game was one such game as Delanie Walker just barely made it into the end zone on fourth and goal for the game-winning touchdown. Five yards on a punt return might not seem like a huge deal, but when the team actually won the game by basically one inch, maybe that five yards would have helped.

More importantly, HOW DOES A REFEREE MAKE THIS MISTAKE? There are several officials on the crew and they all missed this. As a 49ers fan I certainly don't mind the mistake. But as a football fan, the NFL can't allow for these kinds of mistakes. Maybe the league should have full-time officials. In a game filled with officiating mistakes, this highlights the need for something.