Why In The World Would You Do Something Like This? 49ers Uniform Disaster

Share All sharing options for: Why In The World Would You Do Something Like This? 49ers Uniform Disaster

The short answer is that you don't, because those images aren't from Nike and they're not real. They are, however, a great discussion point and source of mass ridicule. Why in the world would the 49ers revert to those colors? Nike can dream up whatever scheme they want (they didn't, here) but the 49ers would probably all drown themselves in the bay before going along with that particular design, or one of similar ... terrible-ness.

That's right, "terrible-ness." Professional writer, blogger and analyst extraordinaire. After the jump, I'll post the 49ers image in all of its terrible glory. 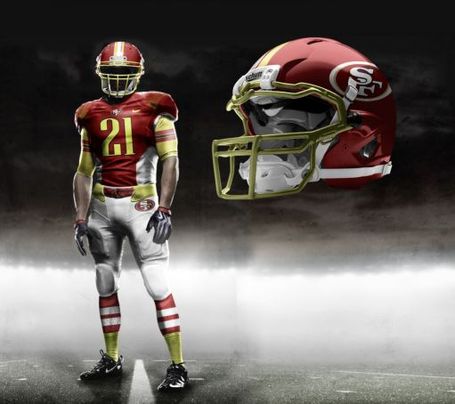 Above is resized, for the full image click here.

One of my 49ers beat writer-buddies, Sam Lam of Examiner.com, who is a renowned uniform and logo nerd, had some more background information and opinion on this abortion of an attempt we've got here.

Side note, anybody remember this piece? So bad it's good.