It is no secret that the Maloof brothers -- the pair of ne'er-do-wells that own the Sacramento Kings -- are something of a public punching bag in the capital of California. As George Maloof becomes more and more in the public eye for appearing to gum up the works regarding the plans for a new arena that will keep the Kings in Sacramento, the vitriol heaped upon the maligned owners begins to become more justified ... and more ferocious. Michael Waldren of Sacramento has taken his hatred of the Maloofs to the most extreme level possible ... restaurant-placemat editorial cartoons 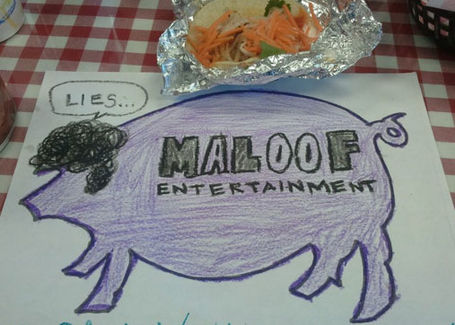 All things considered, this is a pretty spot-on caricature of Mr. Maloof. The defining characteristic -- the Larry-from-Three's Company hairdo -- is present. I guess also writing "MALOOF" on the hog's flank is a fine way of driving the point home. I mean it ain't Boss Tweed or nothin', but it'll do in a pinch.

The part of the drawing that really makes me crack up is the pig saying "Lies ... " Not any specific lies or anything, just saying the word "lies." It's silly, because pigs don't talk, you guys.

Wait a minute, a pig talking ... a label denoting what an icon is meant to represent ... Man, this guy has some chops. He's just a crying Statue of Liberty or a guy with a T-shirt reading "AMERICAN VOTERS" away from being an actual editorial cartoonist. Professional-level chops, y'all.

For all news and information regarding the Sacramento Kings, please visit Sactown Royalty.