Peja Stojakovic is long remembered as perhaps the greatest pure shooter in Sacramento Kings history, but he always struggled in big playoff moments. Now a member of the Dallas Mavericks, he was given another chance to beat the Los Angeles Lakers in the NBA Playoffs, and he's making the most of it.

There it was. The moment basketball shooters dream about. The moment a city wish they could forget.

There was Peja Stojakovic, standing in the left corner, wide open, down one, wiith a chance to send the Sacramento Kings to the NBA Finals. It was a perfect setup. Every Laker was focused on stopping Mike Bibby, and the Kings swung the ball around the perimeter to get a clean look for their best shooter. And they got it: Peja open, wide open, ready to bury the Lakers, end their threepeat bid.

The ball left his hands, and for an instant everyone in Sacramento thought it looked good. But Peja's hands dragged too far on the release, and the ball started curving away, far away. The ball landed in Shaquille O'Neal's lap, and the Kings ended up losing in overtime.

It's a moment Kings fans want to erase and do over. I'm sure Peja does too. 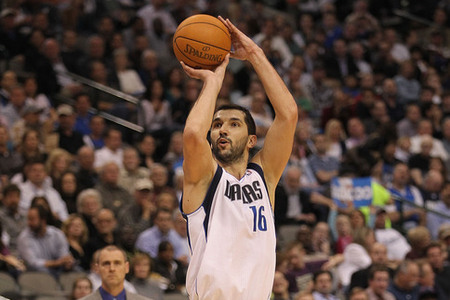 A shooter's world is a curious world, one fraught with ups and downs, streaks and droughts. In basketball, players who are primarily defined by their shooting are generally victims to the cruel factors of variance and randomness. Sometimes a player is feeling it. All it takes the ball going down once, and suddenly they're ready to take more. While there's quite a bit of doubt on the validity of the hot hand theory, there's no doubt shooters feel better the more shots go in, and they're willing to take more shots once that first one goes down.

Much like the power hitter in baseball who has a bad playoff run and gets bounced earlier than expected, the NBA shooter is usually the first one in line to get blamed for a defeat when he doesn't perform up to par. He's a choker. He's not ready for the moment. Forget all the big shots that they hit before; you don't do it late, you don't belong.

Stojakovic certainly isn't alone. Many great shooters have fallen prey to this characterization.

Sometimes the law of averages don't work your way, even if you are a great shooter. And for that one shot, that one game, that one moment, Peja's jump shot eluded him. That's how too many people remember him, and forget he was playing on a tender ankle the past week after injuring it the series before. They also conveniently ignore the barrage of threes he nailed to nearly stun the Timberwolves in Game 3 three years later, or the threes he put down to help Chris Paul in New Orleans, even the five triples he nailed a few weeks ago against the Blazers. As someone who has followed Peja closely his entire career, as someone who has seen him pullup in the corner, flick the wrists, and suddenly have 30 points to his name on a random Tuesday night at Arco Arena, that one shot seemed to linger over all his time there.

And so it remained. With a shooter, all anyone remembers is the last shot, and here Peja had come up short too often for too many people. He was not one who could be trusted. And that seemed like that one errant play might be his legacy. 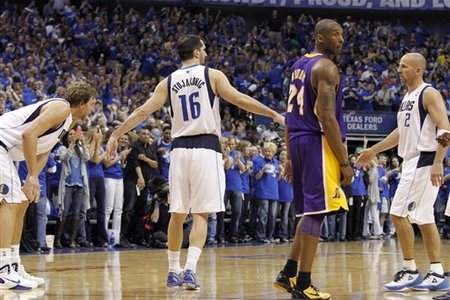 Nine years later, an unlikely shot at redemption occurs. Peja is now aging, foot injuries crippling him to only sporadic bench appearances and spot shooting duties. But here he is again, against those same Lakers, only now they're the desperate ones, fighting to stay alive, fighting to keep the threepeat bid going. In Game 3, it looked like the old Laker ghosts were on him, badly missing two three pointers, and it didn't look like we'd here much from him as LA held a small lead for most of the game.

Not much is going to be written about Peja in the upcoming days. The lion's share of the credit will go to Nowitzki, and deservedly so. But let it be known that whenever Stojakovic found the ball in the fourth quarter, he found net. Lamar Odom was left sagging in the paint in the small forward position on too many occasions, and this time Peja was ready to make them pay for leaving him wide open.

All three of his triples came in that fourth, as Rick Carlisle stuck with his veteran shooter as he nailed crucial shot after crucial shot to keep Dallas close to a Laker team desperately trying to cut the series to 2-1. Nowitzki, Jason Kidd and Jason Terry closed the game down the stretch, but it was Stojakovic who led Dallas in scoring, scoring eleven points and knocking down a shot on almost every opportunity. And he went down on the block on a final Odom isolation, forced him into a difficult shot, and grabbed the rebound to set up the free throw parade.

It might not quite be the same as that fateful Game 7 in Sacramento, and certainly not if the Mavericks don't go on to win the title. All I know is Peja no longer has to think about that airball all the time as his NBA playoff legacy, and he can finally say he played a decisive role in beating the Lakers.

Sometimes regression to the mean can work the right way for a great basketball shooter. One just has to be given the chance to show it. Peja Stojakovic made the most of his opportunity, and maybe one day he can be remembered as one of the guys who buried the Laker dynasty for good.