DeMarcus Cousins of the Sacramento Kings can have a tough time adjusting on the court when things aren't going his way. He definitely has a lot of developing to do as a basketball player, but at his young age he definitely deserves some leeway.

And there are signs of maturity as well. When ESPN analyst and college basketball great Bob Knight ranted about John Calipari and the Kentucky Wildcats and the farce it makes of the notion of student-athlete, Cousins was ready with his rebuttal.

Video after the jump.

Knight discussed how college basketball was suffering a huge image problem regarding the graduation of athletes, and Calipari's Wildcats were the poster child for these issues. Strong enough stance, and not without merit from a coach well-known for graduating his student athletes.

But then he went a step too far, saying last year's Calipari squad didn't attend any of their classes their final semester before leaving for the NBA draft. Cousins was quick to correct him (HT John Clay's Sidelines). 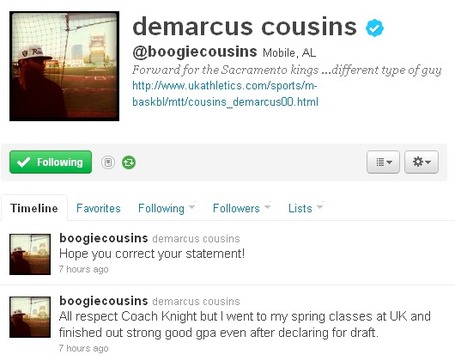 Yo, Bob, you're not a coach anymore. You're paid to inform the public now. Get your facts straight.