So it's been a pretty strong Rookie-Sophomore game to kickoff the 2011 NBA All-Star Weekend. Washington Wizards guard John Wall just won the MVP after dishing out 22 assists, and he teamed up with Sacramento Kings center DeMarcus Cousins (his former teammate at Kentucky) for some nice dunks to help the Rookies to a big-time win. The night's about to settle down, and we're all about to move on with our lives after getting a glimpse at the future of the NBA.

Therefore, I'm not quite sure why Craig Sager, the man of many suits, decided to try and upstage the festivities and take a curious shot at Cousins for some of his troubling issues. Check out the video after the jump.

For those who can't play the video, here's Sager's actual quote:

"It's been well documented he's [DeMarcus Cousins is] not happy when his teammates don't get him the ball..."

Wow. I can understand this kind of question after maybe a tough playoff loss. But after winning a meaningless All-Star contest? Seriously?

TNT's main interviewer, Sager has been known to be pretty relentless in his interviewing style, and while he doesn't necessarily ask bad questions, he can definitely give people the wrong impression if he does things the wrong way. This is one of those times. Cousins's "WTF" reaction is enough to make you cringe.

Oh well, at least Wall's reaction to that horrid question made it somewhat worth it. 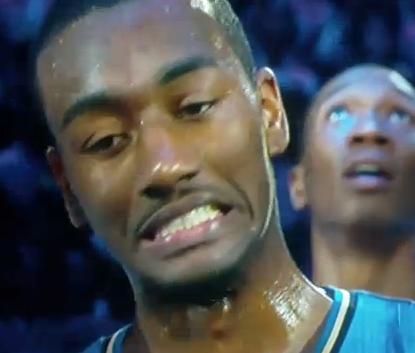