Jabar Gaffney has generally led a quiet NFL existence. He's caught 443 passes for 5622 yards and 24 receiving touchdowns and has flown under the radar for the majority of his NFL career compared to other high profile receivers.

Unfortunately, it appears Gaffney has gone a little Charlie Sheen on us this morning, and has started to say things in public he might end up regretting later. As you can suspect, it has to do with a women, apparently his soon-to-be ex-wife.

What is interesting for Bay Area fans is that Gaffney's rage also seems to be directed at one Lito Sheppard, former Oakland Raider. Gaffney apparently does not hold a high opinion of this man. You can check out Gaffney's words after the jump. 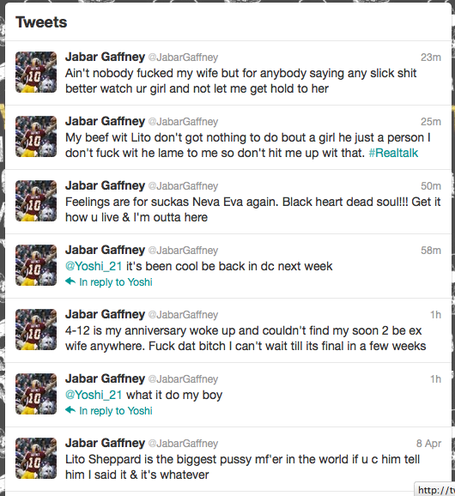 Thanks to Aaron Gleeman of NBC Sports for gathering those Tweets together.

Now, Gaffney does state that Sheppard and his ex-wife have no connection to each other, but Gaffney seems mad at him for some reason. We can always speculate though. Any ideas?

To talk about Sheppard with the Raiders, hit up Silver and Black Pride. To discuss the Gaffney meltdown with Redskins fans, go to Hogs Haven.

Check out the SB Nation YouTube NFL channel below.