The Oakland Raiders have signed second round pick Stefen Wisniewski. The center out of Penn State University signed a 4-year, $4.135 million dollar deal.

With the signing, all eight of Oakland's 2011 draft picks have all signed. They will now head to the training complex in Napa to prepare for the upcoming season.

They also included a photo of the recently signed Wisniewski signing his first contract: 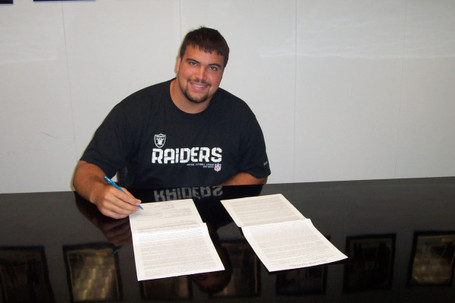 Welcome to the Raiders, Mr. Wisniewski. Try to not get too upset if someone misspells your name sometime in the next four seasons. I'm betting it might just happen more than once.