Oakland Raiders linebacker Rolando McClain was arrested on Thursday after an incident Wednesday night resulted in gun shots being fired. For misdemeanor offenses in Alabama, an officer can only make an arrest if the offense occurred in their presence. In this case, they took the victim's statement and subsequently received an arrest warrant for McClain and another individual, Jerradius Willingham.

McClain was processed on Thursday and is currently in custody awaiting payment on bond of $2,000. Below is the mugshot taken following his arrest: 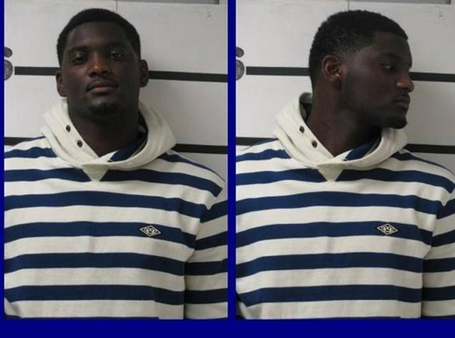 Third degree assault
(a) A person commits the crime of assault in the third degree if:

(4) With intent to prevent a peace officer from performing a lawful duty, he causes physical injury to any person.

(b) Assault in the third degree is a Class A misdemeanor.

Menacing
(a) A person commits the crime of menacing if, by physical action, he intentionally places or attempts to place another person in fear of imminent serious physical injury.

(b) Menacing is a Class B misdemeanor.

Reckless Endangerment
(a) A person commits the crime of reckless endangerment if he recklessly engages in conduct which creates a substantial risk of serious physical injury to another person.

(b) Reckless endangerment is a Class A misdemeanor.