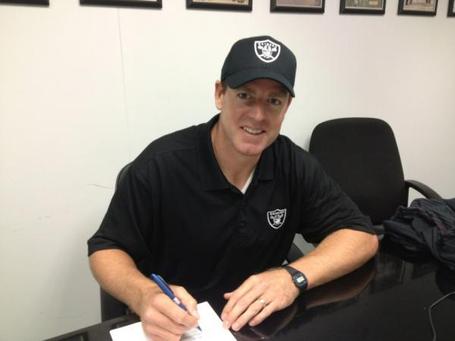 Trey Wingo of ESPN points out that the Raiders are now deprived of all their draft picks from the first four rounds of the 2012 NFL Draft. It does feel like a lot to give up for a potential half-year rental of a starting quarterback, but that appears to be how it's going to work.

Steve Corkran of the Contra Costa Times postulates that Palmer isn't likely to start this week and will not debut until after the bye week against the Oakland Raiders. That way the Raiders can help Palmer get his feet wet with the Oakland playbook. While Palmer and Hue Jackson are familiar with one another from their USC and Cincinnati days, it's possible Palmer has been out of the swing of things for too long. Thus expect to get one start from Kyle Boller before Palmer is ready to go.

To talk about Palmer with Raiders fans, head to Silver and Black Pride.