Share All sharing options for: Oakland Coliseum Draws Thousands (But Only Just) Of A's Fans Against Royals [PHOTO]

The Oakland Athletics once had some of the best fan attendance in the league, partly due to the fact they played in a huge football stadium converted for football purposes. From 1989 to 1992 during the playoff runs, the A's drew over 30,000 a year, placing them near the top of the tier of baseball fan attendance. After the team fell on hard times, attendance plummeted, but enjoyed a brief resurgence during the height of the Moneyball days and managed to draw 26k to 27k a year.

Unfortunately, with the team falling on hard times, the A's have finished 12th, 12th, 13th, 14th, 13th, 14th (Thanks to Baseball Reference for the fan attendance stats) the past six seasons, and the trend doesn't seem to be reversing, if last night's crowd against the Kansas City Royals was any indication. Make the jump for a photo, courtesy of MLBJane on Twitter. 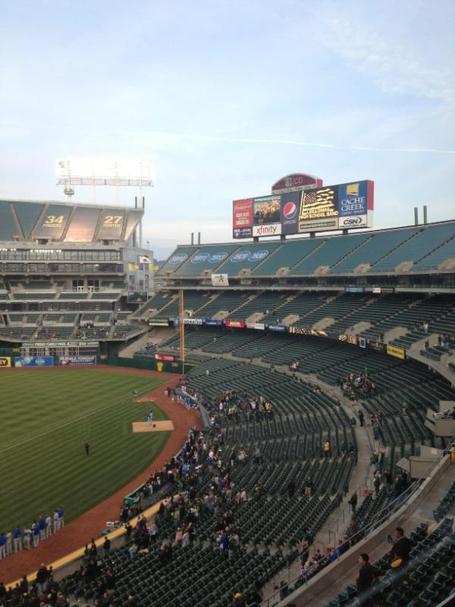 Tim Kawakami of the San Jose Mercury News was at the game, and had a ballpark estimate on the size of the crowd.

-Well, the A’s didn’t get much of a "Cespedes bump" in attendance tonight, unless they needed the bump to get them all the way up to 2,500 or so.

They’ll probably announce something like 5,000, but by all eyeball accounts, it cannot be over 3,000, and probably is dangerously close to 2,000.

This is the smallest crowd I’ve seen at the Coliseum, ever. And it compares to some of those old Candlestick crowds for chilly Giants games in the ’70s–games of my childhood!

Official attendance was announced at 10,054. Must have been using the metric system or something.

To discuss the A's with Oakland fans, head on over to Athletics Nation.

To check out more MLB content from SB Nation, hit up our YouTube channel by checking out the videos below.